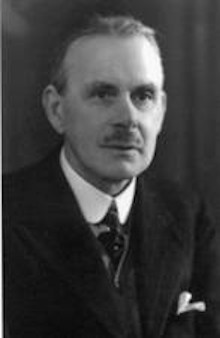 John Miller Andrews, the second Prime Minister of Northern Ireland, is born in Comber, County Down on July 17, 1871. He is the eldest child in the family of four sons and one daughter of Thomas Andrews, flax spinner, and his wife Eliza Pirrie, a sister of William Pirrie, 1st Viscount Pirrie, chairman of Harland and Wolff. He is named after his maternal great-uncle, John Miller of Comber (1795–1883).

Andrews is educated at the Royal Belfast Academical Institution. In business, Andrews is a landowner, a director of his family linen-bleaching company and of the Belfast Ropeworks. His younger brother, Thomas Andrews, who dies in the 1912 sinking of the RMS Titanic, served as managing director of the Harland and Wolff shipyard in Belfast. Another brother, Sir James Andrews, 1st Baronet, was Lord Chief Justice of Northern Ireland.

Andrews is elected as a member of parliament in the House of Commons of Northern Ireland, sitting from 1921 until 1953 (for Down from 1921–29 and for Mid Down from 1929–1953). He is a founder member of the Ulster Unionist Labour Association, which he chairs, and is Minister of Labour from 1921 to 1937. He is Minister of Finance from 1937 to 1940, succeeding to the position on the death of Hugh MacDowell Pollock. Upon the death of James Craig, 1st Viscount Craigavon in 1940, he becomes leader of the Ulster Unionist Party (UUP) and the second Prime Minister of Northern Ireland.

In April 1943 backbench dissent forces Andrews from office. He is replaced as Prime Minister by Basil Brooke, 1st Viscount Brookeborough. He remains, however, the recognised leader of the UUP for a further three years. Five years later he becomes the Grand Master of the Orange Order. From 1949, he is the last parliamentary survivor of the original 1921 Northern Ireland Parliament, and as such is recognised as the Father of the House. He is the only Prime Minister of Northern Ireland not to have been granted a peerage. His predecessor and successor receive hereditary viscountcies, and later prime ministers are granted life peerages.

Throughout his life Andrews is deeply involved in the Orange Order. He holds the positions of Grand Master of County Down from 1941 and Grand Master of Ireland (1948–1954). In 1949 he is appointed Imperial Grand Master of the Grand Orange Council of the World.

Andrews is a committed and active member of the Non-subscribing Presbyterian Church of Ireland. He regularly attends Sunday worship, in the church built on land donated by his great-grandfather, James Andrews, in his hometown Comber. He serves on the Comber Congregational Committee from 1896 until his death on August 5, 1956, holding the position of Chairman from 1935 onwards. He is buried in the small graveyard adjoining the church.

Terence O’Neill becomes the fourth Prime Minister of Northern Ireland on March 25, 1963 following the resignation of Basil Brooke, 1st Viscount Brookeborough. He plays a significant role in the first year of the Troubles, trying unsuccessfully to stem growing sectarian violence.

O’Neill is born on September 10, 1914 at 29 Ennismore Gardens, Hyde Park, London, the son of Captain Arthur O’Neill of Shane’s Castle, Randalstown, the first member of parliament (MP) to be killed in action in World War I five months later. He is educated in the English public school system at West Downs School,  Winchester and Eton College, spending his summer holidays at the family estate in Ulster. He is later commissioned in the British Army, rising to the rank of captain and serving with the Irish Guards in World War II. He is wounded in 1944 and opts to resettle permanently in Northern Ireland.

In 1946, O’Neill is elected to the Parliament of Northern Ireland, representing the Unionist stronghold of Bannside. He remains in the parliament at Stormont for almost 25 years. He becomes Northern Ireland’s Minister of Home Affairs in April 1956, Minister of Finance in September 1956 and Prime Minister in March 1963.

As Prime Minister, O’Neill introduces economic reforms to stimulate industrial growth and employment, with mixed results. He also tries narrowing the divide between Protestants and Catholics. He does this with important gestures, like visiting Catholic schools and expressing condolences on the death of Pope John XXIII.

O’Neill also seeks better relations with the Republic of Ireland, and in January 1965 invites Taoiseach Seán Lemass to Belfast. Catholics and moderate Unionists welcome this reconciliation but many conservative Loyalists, like Ian Paisley, condemn it as treachery.

When the civil rights movement erupts in the late 1960s, O’Neill offers a package of reforms and concessions, including changes to the allocation of housing. These proposals, however, anger staunch Unionists and fail to satisfy many Republicans.

In December 1969, O’Neill appears on Northern Ireland television and makes an impassioned plea for unity, warning that “Ulster stands at the crossroads.” His government is reelected in February 1969, though O’Neill himself is almost voted out of his own seat.

With the situation worsening, O’Neill is further embarrassed by Loyalist attempts to sabotage Belfast’s water supply. Fast losing the confidence of his own party, he resigns the prime ministership in April 1969. He remains in the parliament until January 1970.

O’Neill is made Baron O’Neill of the Maine and spends the last decade of his life in Britain’s House of Lords. He dies of cancer on June 12, 1990.

Terence Marne O’Neill, the fourth Prime Minister of Northern Ireland, resigns on April 28, 1969. He is succeeded by James Chichester-Clark.

O’Neill is born on September 10, 1914 in London. Having served in the Irish Guards, he comes to live in Northern Ireland in 1945. He is returned unopposed for the Stormont seat of Bannside in November 1946 for the Ulster Unionist Party (UUP) and ten years later reaches cabinet rank. When Lord Brookeborough retires as prime minister in March 1963, O’Neill succeeds as the apostle of technocratic modernization who could see off the Northern Ireland Labour Party. In community relations O’Neill is unprecedentedly liberal, visiting Catholic schools and, more dramatically, meeting with the Taoiseach of the Irish Republic, Seán Lemass, at Stormont on January 14, 1964. O’Neill hopes to encourage Catholic acceptance of the state, but he more quickly aggravates suspicious unionist and loyalist opinion.

The eruption of the civil rights movement of 1968 multiplies pressures for substantive reform from the British government. O’Neill impresses on his cabinet colleagues the necessity of concessions. On November 22 he unveils a program of reforms, notably the closing down of the gerrymandered Londonderry Corporation. However, the local government’s rate-based franchise is for the time untouched. In a television broadcast on December 9, 1968, O’Neill warns that Northern Ireland stands at the crossroads. He calls for an end to street demonstrations but also promises meaningful reforms. There is a massive response from the public, but attitudes polarize again when a radical civil rights march from Belfast to Derry is attacked by loyalists at Burntollet Bridge on January 4, 1969.

O’Neill’s failure to preserve governmental authority by repression or concession leads to discontent in his party. In an attempt to regain the initiative and remake the Ulster Unionist Party, he calls for an election on February 24, 1969. He refuses to campaign for official unionist candidates opposed to his leadership and lends his support to Independent candidates who vow to support him personally. Breaking with unionist convention, O’Neill openly canvasses for Catholic votes. Such strategic innovations fail to produce a clear victory, however, and a phalanx of anti-O’Neill unionists are returned. There is little evidence that O’Neill’s re-branded unionism has succeeded in attracting Catholic votes.

From O’Neill’s point of view, the election results are inconclusive. He is humiliated by his near-defeat in his own constituency of Bannside by Ian Paisley and resigns as leader of the UUP and as Prime Minister on April 28, 1969 after a series of bomb explosions on Belfast’s water supply by the Ulster Volunteer Force (UVF) bring his personal political crisis to a head. Before leaving, he secures “one person, one vote” in place of the ratepayers’ franchise in local elections as well as the succession of the relatively loyal James Chichester-Clarke.

O’Neill retires from Stormont politics in January 1970 when he resigns his seat, having become the Father of the House in the previous year. On January 23, 1970, he is created a life peer as Baron O’Neill of the Maine, of Ahoghill in the County of Antrim. The Maine is a river which flows near Ahoghill.

O’Neill spends his last years at Lisle Court, Lymington, Hampshire, although he continues to speak on the problems of Northern Ireland in the House of Lords where he sits as a crossbencher. His Reform Policies are largely forgotten by British Unionists and Irish Nationalists in Ulster, however he is remembered by historians for his efforts to reform the discrimination and sectarianism within the Province during the 1960s. In retirement he is also a trustee of the Winston Churchill Memorial Trusts.