Hutton is the son of a railways executive. He wins a scholarship to Shrewsbury School and Balliol College, Oxford (BA jurisprudence, 1953) before returning to Belfast to study at Queen’s University Belfast and becoming a barrister, being called to the Bar of Northern Ireland in 1954. He begins working as junior counsel to the Attorney General for Northern Ireland in 1969.

Hutton becomes a Queen’s Counsel in 1970. From 1979 to 1989, as Sir Brian Hutton, he is a High Court judge. In 1989, he becomes Lord Chief Justice of Northern Ireland, becoming a member of the Privy Council of Northern Ireland, before moving to England to become a Lord of Appeal in Ordinary on January 6, 1997. He is consequently granted a life peerage as Baron Hutton, of Bresagh in the County of Down.

On March 30, 1994, as Lord Chief Justice of Northern Ireland, Hutton dismisses Private Lee Clegg‘s appeal against his controversial murder conviction. On March 21, 2002 he is one of four Law Lords to reject David Shayler‘s application to use a “public interest” defence as defined in section 1 of the Official Secrets Act 1989 at his trial.

Hutton represents the Ministry of Defence at the inquest into the killing of civil rights marchers on “Bloody Sunday.” Later, he publicly reprimands Major Hubert O’Neil, the coroner presiding over the inquest, when the coroner accuses the British Army of murder, as this contradicts the findings of the Widgery Tribunal.

Hutton also comes to public attention in 1999 during the extradition proceedings of former Chilean dictator General Augusto Pinochet. Pinochet had been arrested in London on torture allegations by request of a Spanish judge. Five Law Lords, the UK’s highest court, decide by a 3-2 majority that Pinochet is to be extradited to Spain. The verdict is then overturned by a panel of seven Law Lords, including Hutton, on the grounds that Lord Lennie Hoffmann, one of the five Law Lords, has links to human rights group Amnesty International which had campaigned for Pinochet’s extradition.

In 1978, Hutton defends the UK at the European Court of Human Rights in the case of Ireland v United Kingdom, when the court decides that the interrogation techniques used were “inhuman and degrading” and breached the European Convention on Human Rights, but do not amount to “torture.” The court also finds that the practice of internment in Northern Ireland had not breached the Convention. He sentences ten men to 1,001 years in prison on the word of “supergrass” informer Robert Quigley, who is granted immunity in 1984.

Hutton is appointed by Tony Blair‘s government to chair the inquiry on the circumstances surrounding the death of scientist David Kelly. The inquiry commences on August 11, 2003. Many observers are surprised when he delivers his report on January 28, 2004 and clears the British Government in large part. His criticism of the BBC is regarded by some as unduly harsh with one critic commenting that Hutton had given the “benefit of judgement to virtually everyone in the government and no-one in the BBC.” In response to the verdict, the front page of The Independent newspaper consists of one word, “Whitewash?”

Peter Oborne writes in The Spectator in January 2004: “Legal opinion in Northern Ireland, where Lord Hutton practised for most of his career, emphasises the caution of his judgments. He is said to have been habitually chary of making precedents. But few people seriously doubt Hutton’s fairness or independence. Though [he is] a dour Presbyterian, there were spectacular acquittals of some very grisly IRA terrorist suspects when he was a judge in the Diplock era.” 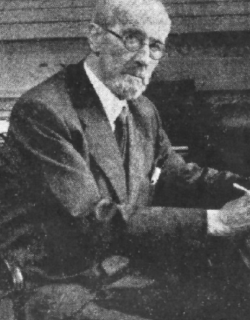 Captain Henry Harrison, nationalist politician and writer, is born in Holywood, County Down on December 17, 1867.

A Protestant nationalist, Harrison is the son of Henry Harrison and Letitia Tennent, the daughter of Robert James Tennent, who had been Liberal Party MP for Belfast from 1847 to 1852. Later, when widowed, she marries the author Hartley Withers.

Harrison goes to Westminster School and then to Balliol College, Oxford. While there he develops an admiration for Charles Stewart Parnell and becomes secretary of the Oxford University Home Rule League. At this time, the Land War is in progress and in 1889 he goes to Ireland to visit the scene of the evictions in Gweedore, County Donegal. He becomes involved in physical confrontations with the Royal Irish Constabulary and as a result becomes a Nationalist celebrity overnight. The following May, Parnell offers the vacant parliamentary seat of Mid Tipperary to Harrison, who leaves Oxford at age 22, to take it up, unopposed.

Only six months later, following the divorce case involving Katharine O’Shea, the Irish Parliamentary Party splits over Parnell’s leadership. Harrison strongly supports Parnell, acts as his bodyguard and aide-de-camp, and after Parnell’s death devotes himself to the service of his widow Katharine. From her he hears a completely different version of the events surrounding the divorce case from that which had appeared in the press, and this is to form the seed of his later books.

At the 1892 United Kingdom general election, Harrison does not defend Mid-Tipperary. He stands at West Limerick as a Parnellite instead, but comes nowhere near winning the seat. In the 1895 United Kingdom general election, he stands at North Sligo, polling better but again far short of winning. In 1895 he marries Maie Byrne, an American, with whom he has a son. He comes to prominence briefly again in 1903 when, in spite of his lack of legal training, he successfully conducts his own case in a court action all the way to the House of Lords.

Otherwise, however, Harrison disappears from public view until his war service with the Royal Irish Regiment when he serves on the Western Front with distinction in the New British Army formed for World War I, reaching the rank of Captain and being awarded the Military Cross (MC). He organises patrols in “No Man’s Land” so successfully that he is appointed special patrol officer to the 16th (Irish) Division. He is invalided out and becomes a recruiting officer in Ireland. He is appointed an Officer of the Order of the British Empire in the 1919 New Year Honours.

Harrison then makes a return to Irish politics, working with Sir Horace Plunkett as Secretary of the Irish Dominion League, an organisation campaigning for dominion status for Ireland within the British Empire. He is a lifelong opponent of Irish partition. He is Irish correspondent of The Economist from 1922 to 1927 and owner-editor of Irish Truth from 1924 to 1927.

Harrison’s two books defending Parnell are published in 1931 and 1938. They have had a major impact on Irish historiography, leading to a more favourable view of Parnell’s role in the O’Shea affair. F. S. L. Lyons comments that he “did more than anyone else to uncover what seems to have been the true facts” about the Parnell-O’Shea liaison. The second book, Parnell, Joseph Chamberlain and Mr Garvin, is written in response to J. L. Garvin‘s biography of Joseph Chamberlain, which had ignored his first book, Parnell Vindicated: The Lifting of the Veil. Later, he successfully repulses an attempt in the official history of The Times to rehabilitate that newspaper’s role in using forged letters to attack Parnell in the late 1880s. In 1952 he forces The Times to publish a four-page correction written by him as an appendix to the fourth volume of the history.

During the difficult years of the Anglo-Irish Trade War over the land purchase annuities, declaration of the Republic, Irish neutrality during World War II, and departure from the Commonwealth, Harrison works to promote good relations between Britain and Ireland. He publishes various books and pamphlets on the issues in dispute and writes numerous letters to The Times. He also founds, with General Sir Hubert Gough, the Commonwealth Irish Association in 1942.

At the time of his death on February 20, 1954, Harrison is the last survivor of the Irish Parliamentary Party led by Parnell, and as a member of the pre-1918 Irish Parliamentary Party, he seems to have been outlived only by John Patrick Hayden, who dies a few months after him in 1954 and by Patrick Whitty and John Lymbrick Esmonde who are only MPs for a very short time during World War I. He is buried in Holywood, County Down.