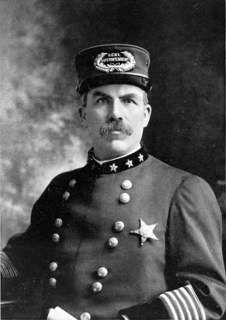 Francis O’Neill, Irish-born American police officer and collector of Irish traditional music, is born in Tralibane, near Bantry, County Cork on August 28, 1848. His biographer Nicholas Carolan refers to him as “the greatest individual influence on the evolution of Irish traditional dance music in the twentieth century.”

At an early age O’Neill hears the music of local musicians, among them Peter Hagarty, Cormac Murphy and Timothy Dowling. At the age of 16, he becomes a cabin boy on an English merchant vessel. On a voyage to New York, he meets Anna Rogers, a young emigrant whom he later marries in Bloomington, Illinois. The O’Neills move to Chicago, and in 1873 he becomes a policeman with the Chicago Police Department. He rises through the ranks quickly, eventually serving as the Chief of Police from 1901 to 1905. He has the rare distinction, in a time when political “pull” counts for more than competence, of being re-appointed twice to the position by two different mayors.

O’Neill is a flautist, fiddler and piper and is part of the vibrant Irish community in Chicago at the time. During his time as chief, he recruits many traditional Irish musicians into the police force, including Patrick O’Mahony, James O’Neill, Bernard Delaney, John McFadden and James Early. He also collects tunes from some of the major performers of the time including Patsy Touhey, who regularly sends him wax cylinders and visits him in Chicago. He also collects tunes from a wide variety of printed sources.

O’Neill retires from the police force in 1905. After that, he devotes much of his energy to publishing the music he has collected. He dies in Chicago, at the age of 87, on January 28, 1936.

In 2000, a life-size monument of Francis O’Neill playing a flute is unveiled next to the O’Neill family homestead in Tralibane, County Cork. The monument, and a commemorative wall are erected through the efforts of the Captain Francis O’Neill Memorial Company.

In 2008, Northwestern University Press issues Captain O’Neill’s Sketchy Recollections of an Eventful Life in Chicago, a non-musical memoir edited by Ellen Skerrett and Mary Lesch, O’Neill’s great-granddaughter, with a foreword by Nicholas Carolan of the Irish Traditional Music Archive. Carolan himself writes a musical biography of O’Neill, A Harvest Saved: Francis O’Neill and Irish Music in Chicago, which is published in Ireland by Ossian in 1997.

In August 2013, the inaugural Chief O’Neill Traditional Music Festival takes place in Bantry, County Cork, just a few miles from Tralibane. The 2013 event marks the centenary of the publication of O’Neill’s Irish Minstrels and Musicians. The event has taken place annually since. 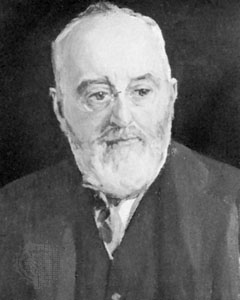 Timothy Michael “Tim” Healy, Irish nationalist politician, journalist, author, barrister, and one of the most controversial Irish Members of Parliament (MPs) in the House of Commons of the United Kingdom of Great Britain and Ireland, dies in Chapelizod, County Dublin, on March 26, 1931.

Healy is born in Bantry, County Cork, the second son of Maurice Healy, clerk of the Bantry Poor Law Union, and Eliza Healy (née Sullivan). His father is transferred in 1862 to a similar position in Lismore, County Waterford. Timothy is educated at the Christian Brothers school in Fermoy, and is otherwise largely self-educated, in 1869, at the age of fourteen, he goes to live with his uncle Timothy Daniel Sullivan in Dublin.

Healy then moves to England in 1871, working first as a railway clerk and then from 1878 in London as parliamentary correspondent of The Nation, writing numerous articles in support of Charles Stewart Parnell, the newly emergent and more militant home rule leader, and his policy of parliamentary obstructionism. Healy takes part in Irish politics and becomes associated with Parnell and the Irish Parliamentary Party. After being arrested for intimidation in connection with the Irish National Land League, he is promptly elected as member of Parliament for Wexford in 1880.

In Parliament, Healy becomes an authority on the Irish land question. The “Healy Clause” of the Land Act of 1881, which protects tenant farmers’ agrarian improvements from rent increases imposed by landlords, not only makes him popular throughout nationalist Ireland but also wins his cause seats in Protestant Ulster. He breaks with Parnell in 1886 and generally remains at odds with subsequent leaders of the Irish Parliamentary Party, though he is a strong supporter of proposals for Irish Home Rule. Meanwhile, he is called to the Irish bar in 1884 and becomes a queen’s counsel in 1899.

Dissatisfied with both the Liberals and the Irish Nationalists after the Easter Rising in 1916, Healy supports Sinn Féin after 1917. He returns to considerable prominence in 1922 when, on the urging of the soon-to-be Irish Free State’s Provisional Government of W.T. Cosgrave, the British government recommends to King George V that Healy be appointed the first “Governor-General of the Irish Free State,” a new office of representative of the Crown created in the 1921 Anglo-Irish Treaty and introduced by a combination of the Irish Free State Constitution and Letters Patent from the King.

Healy believes that he has been awarded the Governor-Generalship for life. However, the Executive Council of the Irish Free State decides in 1927 that the term of office of Governors-General will be five years. As a result, he retires from the office and public life in January 1928 and publishes his extensive two volume memoirs later in that year. Throughout his life he is formidable because he is ferociously quick-witted, because he is unworried by social or political convention, and because he knows no party discipline. Towards the end of his life he becomes more mellowed and otherwise more diplomatic.

Healy dies on March 26, 1931, at the age of 75, in Chapelizod, County Dublin. He is buried in Glasnevin Cemetery in Dublin.