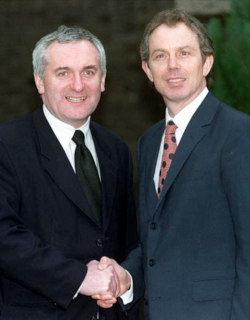 At an informal European Union summit near Bonn on February 26, 1999, Taoiseach Bertie Ahern and British Prime Minister Tony Blair agree to push for implementation of the Good Friday Agreement by the March 10 deadline.

As EU delegates discuss the Union’s budget and Europe‘s farming subsidies, the two prime ministers vow to battle on with the peace deal’s outstanding problems.

“We’re very clear on what we have to do in the Good Friday agreement … we have just got to keep pushing the thing forward as well as we possibly can,” says Blair.

Both Ahern and Blair say the way forward on the outstanding deadlocked issue of paramilitary disarmament is through the official decommissioning commission. Chaired by former Canadian General John de Chastelain, the international commission is working to take arms out of the province’s political arena.

The republican party Sinn Féin insists it is fully cooperating with the commission, which is implementing the final deadline for the handover of arms in May 2000. But some Ulster Unionists oppose further peace moves because of the Irish Republican Army‘s (IRA) failure to begin disarming.

According to Ahern and Blair, the following few weeks will be a key time to try and finalise disarmament issues.

“During the month of March … we can conclude the central aspects,” says Blair.

However, in a separate development on February 26, the chairman of the IRA’s political wing, Sinn Féin’s Mitchel McLaughlin, warns that pressure on disarmament could cause irreparable damage to the fragile peace process. He adds that disarmament should not become a litmus test for progress.

“Those who are now demanding prior decommissioning before we move to setting up the executive are reneging on the Good Friday Agreement,” says McLaughlin in an interview with BBC Radio.

(From BBC News Online Network, Friday, February 26, 1999 | Pictured: Bertie Ahern with Tony Blair at the signing of the Good Friday Agreement in April 1998) 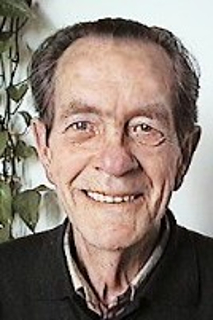 Leonard Eugene Boyle, Irish and Canadian scholar in medieval studies and palaeography, is born in Ballintra, County Donegal on November 13, 1923. He is the first Irish and North American Prefect of the Vatican Library in Rome from 1984 to 1997.

Boyle spends some years in Tralee, County Kerry, following the July 1940 death of his older brother John, who is a member of Garda Síochána and drowns while on holiday in Ballybunion, County Kerry. He is educated in the Irish language and enters the Dominican Order in 1943. He is ordained a priest in 1949 having received his doctorate in Oxford.

Boyle frequently visits Tralee, where a number of his family still reside, and is involved in many projects in the town. His immense knowledge and expertise in historical and archaeological issues is freely given in order to enhance the town. Of particular concern is his hope that the site of the original Dominican Priory at the centre of the town be conserved for future archaeological excavation.

In 1984 Boyle is appointed Prefect of the Vatican Library by Pope John Paul II. This appointment takes him by surprise but appears to be a recognition of his immense scholarship, expertise in antiquity and renowned interest in learning as a whole. In an effort to modernise the Vatican Library, he sets about the digitisation of the library’s many thousands of manuscripts that date from hundreds of years BC, which leads to their greater availability to scholars around the world. He also extends the opening hours of the library and employs women for the first time as part of the library’s staff. In 1987, he is made an Officer of the Order of Canada. In 1997, he is ousted as Prefect after his dealings with some American fund-raising associates result in lawsuits involving the Vatican.

Known for his wit and independence of mind and spirit, Boyle is once asked of his interest in being a Cardinal given the fact that all of his predecessors have gone on to be Cardinals. His reply is in the negative saying “nothing but the papacy” would do him.

Father Boyle dies on October 25, 1999. He is buried in his beloved Basilica di San Clemente, in 2000, a year after his death, following official desire to give him the honour of interment in the vaults of San Clemente — one of Rome’s holiest and most historical shrines.