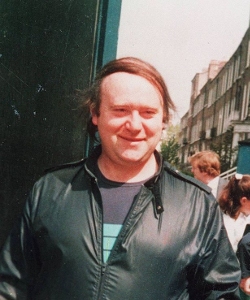 Martin Cahill, prominent Irish criminal from Dublin, is assassinated on August 18, 1994. Cahill generates a certain notoriety in the media, which refers to him by the sobriquet “The General.” During his lifetime, Cahill takes particular care to hide his face from the media and is rarely photographed.

At age 16, Cahill is convicted of two burglaries and sentenced to an industrial school run by the Oblates of Mary Immaculate at Daingean, County Offaly. With his brothers, he continues to commit multiple burglaries in the affluent neighbourhoods nearby, at one point even robbing the Garda Síochána depot for confiscated firearms.

In 1983, Cahill and his gang famously steal gold and diamonds with a value of over €2.55 million from O’Connor’s jewelers in Harolds Cross. The jewelers subsequently is forced to close, with the loss of more than one hundred jobs. He is also involved in stealing some of the world’s most valuable paintings from Russborough House in 1986 and extorting restaurants and hot dog vendors in Dublin’s nightclub district.

On November 1, 1993, Cahill’s gang abducts National Irish Bank CEO Jim Lacey, his wife, and four children and holds them hostage in an attempt to force the bank to hand over the estimated €10 million in cash in the bank’s vault. Ultimately, the plan fails and the gang is arrested.

With all gang members from the Lacey kidnapping released on bail, on August 18, 1994, Cahill leaves the house at which he has been staying at Swan Grove and begins driving to a local video store to return a borrowed copy of Delta Force 3: The Killing Game. Upon reaching the intersection of Oxford Road and Charleston Road he is repeatedly shot in the face and upper torso and dies almost instantly. The gunman, who is armed with a .357 Magnum revolver, jumps on a motorbike and disappears from the scene.

There are a number of theories about who murdered Martin Cahill and why. Within hours of Cahill’s murder, the Provisional Irish Republican Army claims responsibility in a press release. The reasons cited are Cahill’s alleged involvement with a Portadown unit of the Ulster Volunteer Force, which had attempted a bomb attack on a south Dublin pub which was hosting a Sinn Féin fund-raiser.

Another theory surfaces that reputedly claims that two of Cahill’s underlings, John Gilligan and John Traynor, had put together a massive drug trafficking ring. When Cahill demanded a cut of the profits, the Gardaí believe that Traynor and Gilligan approached the IRA and suggested that Cahill was importing heroin, a drug that the IRA despised and were trying to prevent from being sold in Dublin. Gilligan reputedly paid the Provisional IRA a considerable sum in exchange for Cahill’s assassination. Frances Cahill’s memoir, Martin Cahill, My Father, alleges the General detested and steered clear of the drug trade.

After a Roman Catholic requiem mass, Martin Cahill is buried in consecrated ground at Mount Jerome Cemetery. In 2001, his gravestone is vandalised and broken in two.