Mac Eoin is a soldier and eventual politician of the Fine Gael party. He is commonly referred to as the “Blacksmith of Ballinalee.” He is born John Joseph McKeon on September 30, 1893 at Bunlahy, Granard, County Longford, the eldest son of Andrew McKeon and Catherine Treacy. He joins the United Irish League in 1908. His Irish nationalist activities begin in earnest in 1913, when he joins the Clonbroney Company of the Irish Volunteers. Late that year he is sworn into the Irish Republican Brotherhood and joins the Granard circle of the organization.

Mac Eoin comes to prominence in the Irish War of Independence as leader of an Irish Republican Army (IRA) flying column. On November 4, 1920, his column holds the village of Ballinalee situated on the Longford Road between Longford and Granard. They stand against superior British forces, forcing them to retreat and abandon their ammunition. In a separate attack on November 8, he leads his men against the RIC at Ballinalee. An eighteen-year-old Constable Taylor is killed. Constable E. Shateford and two others are wounded. The story is that the small garrison sings “God Save the King” as they take up positions to return fire.

On the afternoon of January 7, 1921, a joint RIC and British Army patrol consisting of ten policemen led by an Inspector, with a security detachment of nine soldiers, appears on Anne Martin’s street. Mac Eoin’s own testimony at his trial, which is not contested by any parties present, states, “I was at the table writing when I was informed of the advance of the party. My account books were left in this house for safety. I was in partial uniform, wearing Sam Browne belt and revolver with two Mills No. 4 bombs in my pocket. Owing to some females being in the house, I had to get out as I could not endanger them by putting up a defence in the house, and as this Officer and Police Force had already signified to my sister and mother their intention to shoot me on sight, I decided to give them a run for their money. I stepped out on the street, about three paces directly in front of the oncoming force, and opened fire with my revolver. The leading file fell, and then the second file in the gateway brought their rifles to the ready. I then threw a bomb, and jumped back behind the porch to let it burst. When it had burst and the smoke had lifted, I saw that the whole force had cleared away, save the officer who was dead or dying on the street.” The casualties from this incident are District Inspector Thomas McGrath killed and a police constable wounded.

Mac Eoin is captured at Mullingar railway station in March 1921, imprisoned and sentenced to death for the murder of RIC District Inspector McGrath in the shooting at Anne Martin’s street in January 1921. Michael Collins organises a rescue attempt in June 1921. Six IRA Volunteers, led by Paddy Daly and Emmet Dalton, capture a British armoured car and, wearing British Army uniforms, gain access to Mountjoy Prison. However, Mac Eoin is not in the part of the jail they believed and, after some shooting, the party retreats.

Within days, Mac Eoin is elected to Dáil Éireann at the 1921 Irish general election, as a TD for Longford–Westmeath. He is eventually released from prison, along with all other members of the Dáil, after Collins threatens to break off treaty negotiations with the British government unless he is freed. It is rumoured that Sean Mac Eoin serves as the best man at Collins’ wedding.

Thomas McMahon, former volunteer in the South Armagh Brigade of the Provisional Irish Republican Army (IRA) and one of the IRA’s most experienced bomb-makers, is sentenced to life in prison on November 23, 1979 for the assassination of Louis Mountbatten, 1st Earl Mountbatten of Burma, and three others (two children and an elderly lady) at Mullaghmore, County Sligo.

McMahon plants a bomb in Shadow V, a 27-foot fishing boat belonging to Mountbatten at Mullaghmore, near Donegal Bay. Lord Mountbatten and the others are killed on August 27, 1979 when the bomb detonates. The other victims are Doreen Knatchbull, Baroness Brabourne, Mountbatten’s elder daughter’s mother-in-law, his grandson Nicholas Knatchbull and 15-year-old crewmember Paul Maxwell.

McMahon is arrested by the Garda, the Republic of Ireland‘s police force, two hours before the bomb detonates at a Garda checkpoint between Longford and Granard on suspicion of driving a stolen vehicle.

The IRA claims responsibility for the act in a statement released immediately afterwards. In the statement from the organisation they say, “This operation is one of the discriminate ways we can bring to the attention of the English people the continuing occupation of our country.”

McMahon is tried for the assassinations in the Republic of Ireland, and convicted by forensic evidence supplied by Dr. James O’Donovan that shows flecks of paint from the boat and traces of nitroglycerine on his clothes. He is sentenced to life imprisonment for murder on November 23, 1979, but is released in 1998 under the terms of the Good Friday Agreement.

Following his release, Toby Harnden in Bandit Country: The IRA & South Armagh (1999) reports that McMahon is holding a tricolour in the first rank of the IRA colour party at a 1998 IRA meeting in Cullyhanna. However, according to a BBC report, McMahon says that he left the IRA in 1990.

McMahon twice refuses to meet John Maxwell, the father of Paul Maxwell, who seeks him out to explain the reasons for his son’s death. In a May 2011 interview for The Telegraph, Maxwell states that he had “made two approaches to McMahon, the first through a priest, who warned me in advance that he thought there wouldn’t be any positive response. And there wasn’t. I have some reservations about meeting him, obviously – it might work out in such a way that I would regret having made the contact. On the other hand, if we met and I could even begin to understand his motivation. If we could meet on some kind of a human level, a man to man level, it could help me come to terms with it. But that might be very optimistic. McMahon knows the door is open at this end.”

McMahon likewise refuses requests from Nicholas Knatchbull’s twin brother, who lost an eye in the same explosion. The latter, however, has forgiven McMahon and other members of the IRA who committed the act.

McMahon’s wife has stated, “Tommy never talks about Mountbatten, only the boys who died. He does have genuine remorse. Oh God yes.”

McMahon lives with his wife Rose in Lisanisk, Carrickmacross, County Monaghan. He has two grown sons. He helps with Martin McGuinness‘s presidential campaign in 2011, erecting posters for McGuinness around Carrickmacross. 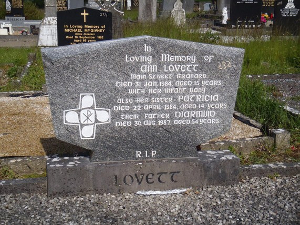 Ann Lovett, a 15-year-old schoolgirl from Granard, County Longford, dies on January 31, 1984 while giving birth beside a grotto. Her baby son dies at the same time and the story of her death plays a huge part in a seminal national debate in Ireland at the time on women giving birth outside marriage.

Tuesday, January 31, 1984 is a cold, wet, winter’s day in Granard. That afternoon, the fifteen-year-old school girl leaves her Cnoc Mhuire Secondary School and makes her way to a Grotto dedicated to the Virgin Mary at the top of her small hometown in the Irish midlands. It is here beneath the statue of Our Lady, that she gives birth, alone, to her infant son.

At around 4:00 PM some children on their way home from school see Ann’s schoolbag on the ground and discover her lying in the Grotto. They alert a passing farmer who rushes to the nearby priest’s house to inform him of the chilling discovery of Ann and her already deceased baby in the adjacent grotto. The priest’s response to his request for help is “It’s a doctor you need.”

Ann, still alive but hemorrhaging heavily, is carried to the house of the Parish Priest from where a doctor is phoned. She is then driven in the doctor’s car to her parents house in the centre of the town. By the time an ambulance arrives it is already too late.

An inquest is held in Mullingar a few weeks later and finds that Ann’s death is due to irreversible shock caused by hemorrhage and exposure during childbirth. The inquest also confirms that, contrary to claims emanating from the local community, some people did indeed know about Ann’s condition before her death. Subsequent inquiries by the Gardaí, the Department of Education and the Midlands Health Board have yet to be published leaving the tragic events of that day and the circumstances that forced a young girl to leave her classroom on a cold, wet winters day to give birth alone in a grotto, still shrouded in uncertainty.

Ann Lovett’s death comes just four months after the outcome of a divisive abortion referendum in which a two-thirds majority vote to enshrine the right to life of the unborn in the constitution, creating confusion over where that leaves the rights of the mother. In the ensuing public debate, the tragic events at Granard become symbolic of the emerging clash between church and state.