William Orr, a member of the United Irishmen, is executed by the British on October 14, 1797 in what is widely believed at the time to be “judicial murder” and whose memory leads to the rallying cry “Remember Orr” during the Irish Rebellion of 1798. He is regarded as the first United Irish martyr.

Little is known of Orr’s early life. He is born in 1766 to a Presbyterian farming family and bleach-green proprietor, at Ferranshane outside Antrim town. The family is in comfortable circumstances and, as a result, he receives a good education. His appearance and manner are at the time considered noteworthy as he stands 6′ 2″ in height and is always carefully and respectably dressed, a familiar feature in his apparel being a green necktie, which he wears “even in his last confinement.” His popularity amongst his countrymen is also noted, particularly among the Northern Presbyterian patriots. He becomes active in the Irish Volunteers and then joins the United Irishmen. Sometime in the mid-1790s, he contributes several articles to their newspaper, the Northern Star.

Orr is charged at Carrickfergus Town Hall with administering the United Irishmen oath to a soldier named Hugh Wheatly, an offence which had recently been deemed a capital charge under the 1796 Insurrection Act. The offence is aggravated from a legal point of view because of the allegation that it is a serving soldier whom he is alleged to have administered the oath to. The prosecution makes the most of this “proof” of the “treasonable” aim of the United Irishmen to “seduce from their allegiance” the “men who are the Kingdom’s only safeguard against the foreign foe.”

The United Irishmen know from the evidence of some of their own number that Orr had not administered the oath on the occasion alleged. They also have the evidence of another eyewitness, James “Jemmy” Hope. The soldier witness Wheatly perjures himself and it is proved he is of bad character. The person who did tender the oath is a well known member of the Society, William McKeever, who subsequently escapes to the United States. It is widely believed at the time that the authorities wish to make an example of Orr to act as a deterrent to potential United Irishmen recruits.

The actual case, which does not appear in the course of the proceedings but everyone, according to T. A. Jackson, is “in the know” and fully aware that the United Irishmen’s oath had been administered to a soldier “whether it was Orr or another who administered the oath was merely incidental.”

Orr is represented by John Philpot Curran, and the trial leads to a speech, which, according to T. A. Jackson, “is among the most remarkable of his many remarkable speeches.” It is a charge of libel against the Press newspaper, the journal founded by Arthur O’Connor to replace the Northern Star. The Press had published an open letter to the Viceroy, remarking scornfully on his refusal to show clemency to Orr. Curran’s defence is a counter-attack — an indictment of the Government, root and branch.

The only evidence used against Orr is the unsupported evidence of the soldier Wheatly and after hearing Curran’s defence of the prisoner, “there could be no possible doubt of his innocence.” Even the presiding judge, Barry Yelverton, 1st Viscount Avonmore, is said to have shed tears at the passing of the death sentence, although Orr’s friend, the poet and United Irishman William Drennan expresses his disgust at this display with the words “I hate those Yelvertonian tears.”

The sentence was hardly passed on Orr when regret is to seize on those who had aided in securing that verdict. The witness Wheatly, who subsequently goes insane and is believed to have died by his own hand, makes an affidavit before a magistrate admitting that he had sworn wrongly against Orr. Two members of the jury make depositions stating that they had been “induced to join in the verdict of guilty while under the influence of drink,” while two others swear that they had “been terrified into the same course by threats of violence.”

These particulars are placed before the Viceroy, but Lord Camden, the Lord Lieutenant of Ireland, is “deaf to all appeals” (including from his sister Lady Londonderry). “Well might Orr exclaim within his dungeon” he said “that the Government had laid down a system having for its object murder and devastation.”

Though his execution is postponed three times, Orr is hanged in the town of Carrickfergus on October 14, 1797, surrounded by an extra strong military guard. It is said that the population of the town, to express their sympathy with the “patriot” being “murdered by law,” and to mark their repugnance of the conduct of the Government towards him, quit the town on the day of his execution.

Orr’s fate “excited the deepest indignation throughout the country” and it is commented on “in words of fire” by the national writers of the period, and for many years after the rallying cry of the United Irishmen is “Remember Orr.” The journalist Peter Finnerty, who publishes an attack on Yelverton and Camden for their conduct in the matter, is later convicted of seditious libel, despite an eloquent defence by Curran.

(Pictured: William Orr from a sketch by E. A. Morrow) 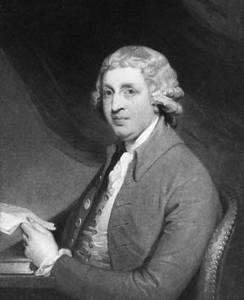 John Beresford, Irish statesman, is born in Cork on March 14, 1738. He is a younger son of Sir Marcus Beresford who, having married Catherine, sole heiress of James Power, 3rd Earl of Tyrone, is created Earl of Tyrone in 1746. After the death of the earl in 1763, Beresford’s mother successfully asserts her claim suo jure to the barony of La Poer. John Beresford thus inherits powerful family connections. He is educated at Kilkenny College and Trinity College, Dublin and is called to the Irish bar.

Beresford enters the Irish House of Commons as member for Waterford County in 1761. In 1768, 1783, 1789 and finally in 1798, he stands also for Coleraine, however choosing each time to sit for Waterford.

His industry, added to the influence of his family, procures his admission to the Privy Council of Ireland in 1768, and his appointment as one of the commissioners of revenue two years later. In 1780 he becomes first commissioner of revenue, a position which gives him powerful influence in the Irish administration. He introduces some useful reforms in the machinery of taxation and is the author of many improvements in the architecture of the public buildings and streets of Dublin. He is first brought into conflict with Henry Grattan and the popular party in 1784, by his support of the proposal that the Irish parliament in return for the removal of restrictions on Irish trade should be bound to adopt the English navigation laws.

In 1786, Beresford is sworn a member of the Privy Council of Great Britain, and the power which he wields in Ireland through his numerous dependants and connections grows to be so extensive that a few years later he is spoken of as the “King of Ireland.” He is a vehement opponent of the increasing demand for Catholic Emancipation and when it becomes known that the Earl Fitzwilliam is to succeed John Fane, 10th Earl of Westmorland, as Lord Lieutenant of Ireland in 1795 for the purpose of carrying out a conciliatory policy, Beresford expresses strong hostility to the appointment. One of Fitzwilliam’s first acts is to dismiss Beresford from his employment for corruption, but with permission to retain his entire official salary for life, and with the assurance that no other member of his family will be removed. Fitzwilliam has been encouraged in this course of action by William Ponsonby. Beresford immediately exerts all his influence with his friends in England, to whom he describes himself as an injured and persecuted man. He appeals to William Pitt the Younger and goes to London to lay his complaint before the English ministers.

The recall of Fitzwilliam, which is followed by such momentous consequences in the history of Ireland is, as the viceroy himself believes, mainly due to Beresford’s dismissal. There has been a misunderstanding on the point between Pitt and Fitzwilliam. The latter, whose veracity is unimpeachable, asserts that previous to his coming to Ireland he had informed the prime minister of his intention to dismiss Beresford, and that Pitt had raised no objection. Pitt denies all recollection of any such communication, and on the contrary describes the dismissal as an open breach of the most solemn promise. In a letter to Frederick Howard, 5th Earl of Carlisle, justifying his action, Fitzwilliam mentions that malversation had been imputed to Beresford. Beresford sends a challenge to Fitzwilliam, but the combatants are interrupted on the field and Fitzwilliam then makes an apology.

When John Pratt, 1st Marquess Camden, replaces Fitzwilliam in the viceroyalty in March 1795, Beresford resumes his former position. On the eve of the Irish Rebellion of 1798 his letters to William Eden, 1st Baron Auckland, give an alarming description of the condition of Ireland and he counsels strong measures of repression. When first consulted by Pitt on the question of the union, Beresford appears to dislike the idea but he soon becomes reconciled to the policy and warmly supports it. After the union Beresford continues to represent County Waterford in the Parliament of the United Kingdom, and he remains in office until 1802, taking an active part in settling the financial relations between Ireland and Great Britain.

In 1760, Beresford marries Constantia Ligondes, who dies in 1772. In 1774, he marries Barbara Montgomery, a celebrated beauty who figures in Sir Joshua Reynolds‘ picture of The Graces. He has large families by both marriages. His sons include Marcus Beresford, George Beresford, and John Claudius Beresford. John Beresford dies near Derry on November 5, 1805.