George Augustus Moore, novelist, short story writer, poet, art critic, memoirist, and dramatist, is born in Moore Hall, near Lough Carra, County Mayo on February 24, 1852. He is considered an innovator in fiction in his day.

Moore comes from a distinguished Catholic family of Irish landholders. When he is 21, he leaves Ireland for Paris to become a painter. His Reminiscences of the Impressionist Painters (1906) vividly describes the Café Nouvelle-Athènes and the circle of Impressionist painters who frequent it. He is particularly friendly with Édouard Manet, who sketches three portraits of him. Another account of the years in Paris, in which he introduces the younger generation in England to his version of fin de siècle decadence, is his first autobiography, Confessions of a Young Man (1888).

Deciding that he has no talent for painting, Moore returns to London in 1882 to write. His first novels, A Modern Lover (1883) and A Mummer’s Wife (1885), introduce a new note of French Naturalism into the English scene, and he later adopts the realistic techniques of Gustave Flaubert and Honoré de Balzac. Esther Waters (1894), his best novel, deals with the plight of a servant girl who has a baby out of wedlock. It is a story of hardship and humiliation illumined by the novelist’s compassion. It is an immediate success, and he follows it with works in a similar vein: Evelyn Innes (1898) and Sister Teresa (1901).

In 1901 Moore moves to Dublin, partly because of his loathing for the South African War and partly because of the Irish Literary Revival spearheaded by his friend, the poet William Butler Yeats. In Dublin he contributes notably to the planning of the Abbey Theatre. He also produces The Untilled Field (1903), a volume of fine short stories reminiscent of Ivan Turgenev’s writing that focuses on the drudgery of Irish rural life, and a short poetic novel, The Lake (1905). The real fruits of his life in Ireland, however, come with the trilogy Hail and Farewell (Ave, 1911; Salve, 1912; Vale, 1914). Discursive, affectionate, and satirical by turns, it reads like a sustained monologue that is both a carefully studied piece of self-revelation and an acute, though not always reliable, portrait gallery of his Irish acquaintance, which included Yeats, George William Russell, and Lady Gregory. Above all it is a perfectly modulated display of the comic spirit.

The increasing narrowness of the Irish mind, politics, and clericalism sends Moore back to England in 1911. After Hail and Farewell he makes another literary departure. Aiming at epic effect he produces The Brook Kerith (1916), an elaborate and stylish retelling of the Gospel story that is surprisingly effective despite some dull patches. He continues his attempts to find a prose style worthy of epic theme in Héloïse and Abélard (1921). His other works include A Story-Teller’s Holiday (1918), a blend of autobiography, anecdote, Irish legend, and satire, Conversations in Ebury Street (1924), autobiography, The Pastoral Loves of Daphnis and Chloe (1924) and Ulick and Soracha (1926), an Irish legendary romance.

George Moore dies at his home at Ebury Street in the London district of Belgravia on January 21, 1933, leaving a fortune of £70,000. He is cremated in London at a service attended by Ramsay MacDonald among others. An urn containing his ashes is interred on Castle Island in Lough Carra in view of the ruins of Moore Hall, which had been burned by anti-treaty forces in 1923, during the final months of the Irish Civil War. 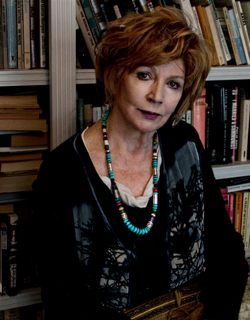 Edna O’Brien, novelist, memoirist, playwright, poet and short story writer, is born in Tuamgraney, County Clare on December 15, 1930. Philip Roth describes her as “the most gifted woman now writing in English,” while the former President of Ireland Mary Robinson cites her as “one of the great creative writers of her generation.” Her works often revolve around the inner feelings of women, and their problems in relating to men, and to society as a whole.

O’Brien is the youngest child of “a strict, religious family.” From 1941 to 1946 she is educated by the Sisters of Mercy, a circumstance that contributes to a “suffocating” childhood. “I rebelled against the coercive and stifling religion into which I was born and bred. It was very frightening and all pervasive. I’m glad it has gone.” She is fond of a nun as she deeply misses her mum and tries to identify the nun with her mother.

In 1950, O’Brien is awarded a licence as a pharmacist. In Ireland, she reads such writers as Leo Tolstoy, William Makepeace Thackeray, and F. Scott Fitzgerald. In 1954, she marries, against her parents’ wishes, the Irish writer Ernest Gébler and the couple moves to London. They have two sons but the marriage is dissolved in 1964. Gébler dies in 1998.

In London, O’Brien purchases Introducing James Joyce, with an introduction written by T. S. Eliot. When she learns that James Joyce‘s A Portrait of the Artist as a Young Man is autobiographical, it makes her realise where she might turn, should she decide to write herself. In London she starts work as a reader for Hutchinson, where on the basis of her reports she is commissioned, for £50, to write a novel. Her first novel, The Country Girls (1960), is often credited with breaking silence on sexual matters and social issues during a repressive period in Ireland following World War II.

This novel is the first part of a trilogy of novels which includes The Lonely Girl (1962) and Girls in Their Married Bliss (1964). Shortly after their publication, these books are banned and, in some cases burned, in her native country due to their frank portrayals of the sex lives of their characters. Her novel A Pagan Place (1970) is about her repressive childhood. Her parents are vehemently against all things related to literature and her mother strongly disapproves of her daughter’s career as a writer.

O’Brien is a panel member for the first edition of the BBC‘s Question Time in 1979. In 2017, she becomes the sole surviving member.

In 1980, she writes a play, Virginia, about Virginia Woolf, and it is staged originally in June 1980 at the Stratford Festival, Ontario, Canada and subsequently in the West End of London at the Theatre Royal Haymarket with Maggie Smith and directed by Robin Phillips. It is staged at The Public Theater in New York City in 1985.

Other works include a biography of James Joyce, published in 1999, and one of the poet Lord Byron, Byron in Love (2009). House of Splendid Isolation (1994), her novel about a terrorist who goes on the run, marks a new phase in her writing career. Down by the River (1996) concerns an under-age rape victim who seeks an abortion in England, the “Miss X case.” In the Forest (2002) deals with the real-life case of Brendan O’Donnell, who abducts and murders a woman, her three-year-old son, and a priest, in rural Ireland.

O’Brien now lives in London. She receives the Irish PEN Award in 2001. Saints and Sinners wins the 2011 Frank O’Connor International Short Story Award, the world’s richest prize for a short story collection. Faber and Faber publishes her memoir, Country Girl, in 2012. In 2015, she is bestowed Saoi by the Aosdána.