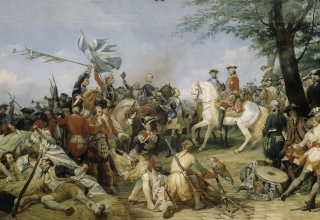 The Irish Brigade of France, a brigade in the French Royal Army composed of Irish exiles most commonly identified in Irish history as The Wild Geese, achieve its most glorious victory at the Battle of Fontenoy on May 11, 1745 during the War of the Austrian Succession.

The battle takes place in the Belgian municipality of Antoing, near Tournai. A French army of 50,000 commanded by Marshal Maurice de Saxe defeats a slightly larger Pragmatic Army of 52,000 consisting of the Dutch Republic, Great Britain, Hanover and the Holy Roman Empire, led by Prince William, Duke of Cumberland. The Irish Brigade is led by Justin McCarthy, Viscount Mountcashel and is comprised of six regiments.

Despite setbacks elsewhere, at the end of 1744 the French hold the initiative in the Austrian Netherlands, and their leaders consider this theatre offers the best opportunity for a decisive victory. In late April, they besiege Tournai, which controls access to the upper Scheldt basin, which makes it a vital link in the North European trading network and the Allies march to its relief.

Leaving 22,000 men in front of Tournai, Saxe places his main force five miles away in the villages of St. Antoine, Vezin and Fontenoy, along a naturally strong feature which he strengthens with defensive works. After a series of unsuccessful flank assaults, the Allies attack the French centre with a column of 15,000 men.

Colonel Arthur Dillon‘s regiment, which had already been badly shot up earlier in the fight, along with the brigade’s other five, charge the British as they seem on the verge of breaking the French line. Fifty years of Irish frustration and British betrayal now come back to haunt the British. As the men of the Irish Brigade close through a hail of British bullets, their shouts are heard above the din: “Cuimhnígí ar Luimneach agus ar fheall na Sasanach!” (Remember Limerick and the Saxon Faith).

Nothing can withstand the wave of hatred and revenge that breaks on the hapless British line that day. The victory is won but the cost is high. Colonel Dillon is dead and Lord Clare is wounded twice. The brigade suffers 656 casualties in all, the highest percentage of all the French units.

Although the Allies retreat in good order, Tournai falls shortly afterwards, followed by Ghent, Oudenaarde, Bruges and Dendermonde. The withdrawal of British forces in October to deal with the Jacobite Rising facilitates the capture of Ostend and Nieuwpoort. By the end of 1745, France controls much of the Austrian Netherlands, threatening British links with Europe.

However, by early 1746, France is struggling to finance the war and begins peace talks at the Congress of Breda in May. Despite victories at Rocoux in October 1746 and Lauffeld in July 1747, the war continues until the Treaty of Aix-la-Chapelle in 1748.

It is a day never to be forgotten by the Irish worldwide. At Manassas, Virginia, 116 years later, Thomas Francis Meagher cries out to the 69th New York, another regiment of Irishmen, “Remember Fontenoy!”

(Pictured: The Irish Brigade, presenting a captured British colour to Louis XV and the Dauphin)