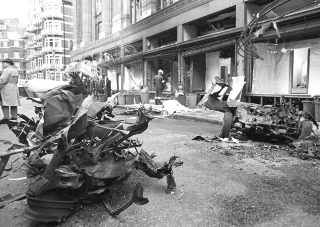 A Provisional Irish Republican Army (PIRA) car bomb kills six and injures ninety outside London‘s Harrods department store, a large, upmarket department store in the affluent Knightsbridge district near Buckingham Palace on December 17, 1983. The IRA Army Council claims that it has not authorised the attack and expresses regret for the civilian casualties. After the bombing, the IRA changes its tactic to focus on military targets on the mainland.

Harrods had been the target of an earlier IRA bomb on December 21, 1974 which was placed in the northeast corner of the first floor. There was a very short warning and the store was in the process of being cleared when it exploded. It was also the target of a much smaller IRA bomb almost ten years later, in January 1993, which injured four people.

From 1973 the Provisional IRA has carried out waves of bombing attacks on commercial targets in London and elsewhere in England as part of its “economic war.” The goal is to damage the economy and cause disruption, which would put pressure on the British government to withdraw from Northern Ireland. On December 10, 1983, the IRA carries out its first attack in London in some time when a bomb explodes at the Royal Artillery Barracks, injuring three British soldiers.

One week later, on the afternoon of December 17, IRA members park a car bomb near the side entrance of Harrods, on Hans Crescent. The bomb contains 25 to 30 lbs. of explosives and is set to be detonated by a timer. It is left in a 1972 blue Austin 1300 GT four-door sedan. At 12:44 PM a man using an IRA codeword phones the central London branch of the Samaritans charity. The caller says there is a car bomb outside Harrods and another bomb inside Harrods, and gives the car’s registration plate. According to police, he does not give any other description of the car.

The bomb explodes at about 1:21 PM, as four police officers in a car, an officer on foot and a police dog-handler near the suspect vehicle. Three officers and three bystanders are killed and 90 others are injured, including 14 police officers. The blast damages 24 cars and all five floors on the side of Harrods, sending a shower of glass down onto the street. The police car absorbs much of the blast and this likely prevents further casualties.

Five people die at the scene of the bombing and a sixth later dies in the hospital. The bystanders who die are Philip Geddes (24), a journalist who had heard about the alert and went to the scene, Jasmine Cochrane-Patrick (25) and Kenneth Salvesen (28), a United States citizen. The Metropolitan Police Service officers killed are Sergeant Noel Lane (28) and Constable Jane Arbuthnot (22). A third officer, Inspector Stephen Dodd (34), dies in the hospital from his injuries on December 24. Constable Jon Gordon survives, but loses both legs and part of a hand in the blast.

At the time of the explosion, a second warning call is made by the IRA. The caller says that a bomb has been left in the C&A department store at the east end of Oxford Street. Police clear the area and cordon it off but this claim is found to be false. In the aftermath of the attack, hundreds of extra police and mobile bomb squads are drafted into London. Aleck Craddock, chairman of Harrods, reports that £1 million in turnover has been lost as a result of the bombing. Despite the damage, Harrods re-opens three days later, proclaiming it will not be “defeated by acts of terrorism.” Denis Thatcher, the husband of British Prime Minister Margaret Thatcher, visits the store and tells reporters “no damned Irishman is going to stop me going there.”