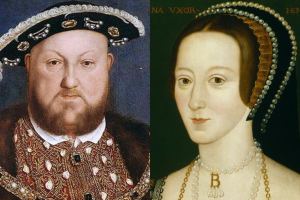 England’s King Henry VIII, Lord of Ireland and self declared King of Ireland, marries Anne Boleyn on January 25, 1533 after a secret marriage November 14, 1532. On May 23, 1533, Thomas Cranmer, Archbishop of Canterbury, declares Henry’s first marriage to Catherine of Aragon to be null and void. Five days later, he declares Henry and Anne’s marriage to be valid.

Anne is crowned Queen of England on June 1, 1533, and on September 7, she gives birth to a daughter who is christened Elizabeth, in honour of Henry’s mother, Elizabeth of York, and who becomes the future Queen Elizabeth I. Henry is disappointed to have a daughter rather than a son but hopes a son will follow and professes to love Elizabeth.

The king and queen are not pleased with married life. The royal couple enjoys periods of calm and affection but Anne refuses to play the submissive role expected of her. Henry dislikes Anne’s constant irritability and violent temper. After a miscarriage in 1534, Henry sees her failure to give him a son as a betrayal. As early as Christmas 1534, Henry is discussing with Archbishop Cranmer and Thomas Cromwell, his chief minister, the chances of leaving Anne without having to return to Catherine.

In January 1536, the Henry is thrown from his horse in a tournament and is badly injured. It seems for a time that the king’s life was in danger. When news of this accident reaches the queen, who is again pregnant and aware of the consequences if she fails to give birth to a son, she is sent into shock and miscarries a male child that is about 15 weeks old. This is seen by most historians as the beginning of the end of the royal marriage.

Anne’s downfall comes shortly after she has recovered from her miscarriage. Henry has Anne investigated for high treason in April 1536. On May 2, she is arrested and sent to the Tower of London where she is tried before a jury of peers, which includes Henry Percy, her first husband, and her own uncle, Thomas Howard. Anne is found guilty on May 15 and is beheaded on Tower Green at 8:00 AM on May 19, 1536, at the age of 36.