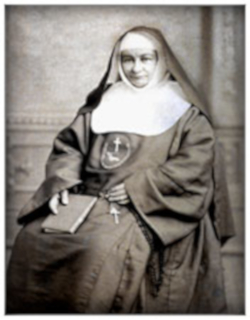 Margaret Anna Cusack, founder of the first Poor Clares convent in the west of Ireland and a talented writer who publishes on the issues of social injustice, is born to an aristocratic family of English origin in Coolock, County Dublin on May 6, 1829. Her writings and actions focus on advocacy of women’s rights including equal pay, equal opportunity for education, and legal reform to give women control of their own property.

Cusack is raised in the Anglican church tradition until her conversion to Catholicism in 1858. She enters the Irish Poor Clare Sisters and is among the first group of Sisters sent to found the convent at Kenmare, County Kerry.

During the next 21 years, Cusack, now known as Sister Francis Clare, dedicates herself to writing. Her writings include a wide range of concerns including lives of the saints, local histories, biographies, books and pamphlets on social issues and letters to the press. As the “Nun of Kenmare” she writes on behalf of the liberation of women and children who are victims of oppression. Income from her books and from her famine relief fund is distributed throughout Ireland. While doing all she can to feed the hungry, at the same time she campaigns vigorously against the abuse of absentee landlords, lack of education for the poor and against a whole system of laws which degrade and oppress a section of society.

To broaden the scope of her work Cusack moves to Knock, County Mayo in 1881 with the idea of expanding the ministry of the Poor Clares. She starts an industrial school for young women and evening classes for daytime land-workers. Several women are attracted by this work and in 1884 she decides to found her own community, The Sisters of St. Joseph of Peace.

Continued conflict in Knock with Church leaders leads Cusack to seek support in England. Under Cardinal Henry Edward Manning and Bishop Edward Bagshawe, she receives approbation for the new religious order from Pope Leo XIII and the Congregation of the Sisters of St. Joseph of Peace is founded in January, 1884, in the Diocese of Nottingham, England.

Later, Cusack travels to the United States to continue her work with immigrant Irish women but is immediately rebuked by Archbishop Michael Corrigan of New York. Just at that time, New Jersey stretches out a hand of welcome and encouragement as Bishop Winand Wigger of the Archdiocese of Newark invites her to establish homes for young Irish working women there. Within a few years, however, she claims that because of Archbishop Corrigan’s criticism of her among bishops throughout the United States, the work of her new community can not continue as long as she remains with them.

Physically exhausted, sick and disillusioned with a patriarchal Church, Cusack withdraws from the Sisters of St. Joseph of Peace and leaves behind the sisters she so dearly loved. She eventually returns to her friends in the Church of England. In later years, she keeps in contact with the Sisters and expresses a loving concern for them. She dies on June 5, 1899 and is buried in the cemetery reserved for the Church of England at Leamington Spa, Warwickshire, England.

Cusack passes into obscurity for a long time until, as a result of the Second Vatican Council, religious orders are encouraged to review their roots and the intent of their founders. Since then there have been a number a studies on Cusack, such as Philomena McCarthy’s The Nun of Kenmare: The True Facts. With the rediscovery of the life and times of Cusack, she has been hailed as a feminist and a social reformer ahead of her time.