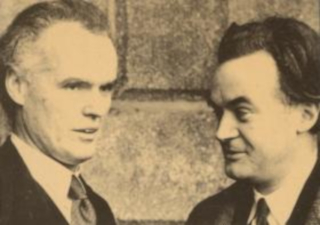 Edwards, known to his friends as Robin and his students as Dudley, is the son of Walter Dudley Edwards, a journalist who comes to Ireland with his wife, Bridget Teresa MacInerney from Clare, and becomes a civil servant. His mother is a supporter of women’s rights and Edwards recalls that he had a ‘Votes for Women’ flag on his pram. His mother is a suffragette and a member of Cumann na mBan, a women’s organisation designed to support the Irish Volunteers. Members of Cumann na mBan gather intelligence, transport arms, nurse wounded men, provide safe houses, and organise support for Irish Republican Army (IRA) men in prison.

Edwards is first educated at the Catholic University School, then moves to St. Enda’s School, a school set up by 1916 Irish revolutionary leader Patrick Pearse, after the 1916 rising, and then Synge Street CBS, finally returning to the Catholic University School. In his final exams he fails French and Irish but gains first place in Ireland in history.

In University College Dublin, Edwards is auditor of the Literary and Historical Society, gains a first-class degree in history in 1929 followed by a first class master’s degree in 1931 with the National University of Ireland prize. He carries out postgraduate work at the University of London and earns his PhD in 1933, published in 1935 as Church and State in Tudor Ireland.

In 1937 Edwards is awarded a D.Litt by the National University of Ireland and in 1939 is appointed to a statutory lectureship in Modern Irish History at University College Dublin. He succeeds Mary Hayden to the Chair of Modern Irish History in 1944, which he holds until he retires in 1979. His contribution to the discipline of History in Ireland is substantial, and includes the setting up of University College Dublin Archives Department, now part of the School of History.

The introduction to Edwards’ book Age of Atrocity records how the leading Irish history journal, Irish Historical Studies, edited by Edwards and Moody, for the first half-century and more of its existence, systematically avoids the theme of violence, killing and atrocity during the 16th and 17th centuries.

Following his wife’s death in April 1985, Robert Dudley Edwards dies on June 5, 1988 in St. Vincent’s Hospital in Dublin after a short illness.