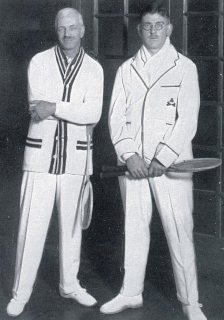 Raised in Dublin, Devlin first develops his badminton skills in the family garden during his childhood with his friend Gordon “Curly” Mack. The two childhood friends graduate from the garden to win an impressive six titles together in men’s doubles at the All England Open Badminton Championships.

Devlin is the second most successful player ever in the All England Open Badminton Championships with 18 titles between 1925 and 1931, including three triple championships in 1926, 1927 and 1929. He dominates the 1920s with six titles at the Irish Open and two titles at the Scottish Open.

Despite being Irish Devlin is part of the English team that tours Canada in 1925 to promote the sport on behalf of the Canadian Badminton Association which had recently been formed in 1921. He is also part of a second English touring team that visits Canada during 1930. A match is held at the Granite Club in Toronto which England wins 7-2.

When his playing career comes to an end in 1931, Devlin moves to North America to become the first known full-time badminton coach. He first sets foot in Winnipeg and then in Baltimore. After spending time coaching in North America, he returns to Ireland and teaches his skills to the next generations until he is well into his eighties.

Adding to his success with the racket, Devlin earns a solid reputation as a writer. Over four decades, he authors many books on the technical and tactical aspects of badminton. He is a strong believer in sound technique and becomes the first known player to use the overhead backhand clear.

Two of Devlin’s daughters, Judy and Susan, become badminton legends in their own right, and win six All England women’s doubles titles together as partners. Judy, who also wins ten All England titles in women’s singles, is inducted with her late father into the Badminton Hall of Fame in 1997.