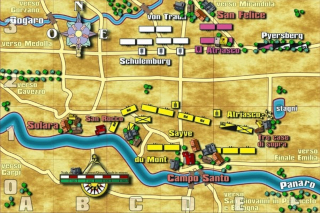 During the War of Austrian Succession, the Irish Brigade of Spain fights at the Battle of Campo Santo in Camposanto, Italy on February 8, 1743. The regiments of Ultonia, Irlanda, and Hibernia form the Irish Brigade fighting in Italy in a Spanish army, led by Gen. Jean Bonaventure Thierry du Mont, comte de Gages. The Spaniards and their Neapolitan allies are fought to a standstill by the Austrians and their Sardinian allies under Field Marshal Otto Ferdinand Graf von Abensperg und Traun on the Panaro.

In January 1743, General De Gages’ 13,000 strong Spanish army lay at Bologna, south of the Panaro. Count Traun’s Austrian and Piedmont-Sardinian army of 11,000 lay to the north of the river, blocking De Gages’ attempts to cross the formidable barrier. Traun prefers a maneuvering defense to risking his army in a pitched battle with his opponent, but concerns in Madrid are more political than strategic. Needing a victory, Philip V of Spain and his Queen Elisabeth Farnese demand that De Gages launch an offensive or tender his resignation. Accordingly, leaving Bologna on the night of February 3, De Gages slips across the Panaro and enters the Duchy of Modena, seeking a decisive encounter with Traun.

Fortunately for De Gages, Marshal Traun is ready to oblige him. Aware of the criticism leveled at him in Vienna where his enemies are trying to relieve him of his command, and also that Spain’s recent seizure of Savoy might well induce the King of Sardinia to negotiate with the Spanish Crown, the Marshal decides that a victory will quell the uproar and induce Austria’s allies to think twice about negotiating. Gathering up his army, Traun moves to block De Gages’ path and prevent him from advancing further into Modena. The two armies meet at the village of Camposanto.

On the morning of the battle, De Gages draws up his army on the outskirts of the village in the traditional fashion with his infantry in the center and the cavalry on the wings. Traun also draws up his army in the same manner, but being slightly outnumbered, he chooses to gamble with an unorthodox strategy. Instead of aligning himself directly opposite the Spaniards, he shifts his troops to the northwest, which means that the center of Traun’s infantry is directly opposite the gap between Gages’ infantry and the right wing of cavalry. Although this means that Traun would have a greater superiority of numbers on this wing and that he could also deliver a flank attack on the Spanish right, his own right flank would, however, be vulnerable to a Spanish flank attack. Marshall is relying on the troops of that wing to delay the Spanish long enough for the action on his other wing to be decisive.

Matters are helped when De Gages chooses 4:00 in the afternoon to launch the attack, which leaves only a few hours of daylight for a battle. The Spanish are initially successful on both wings, where their cavalry drives off the Austro-Piedmontese cavalry, wounding Count Aspremont in the process and leaving the Austrian infantry vulnerable. However instead of reforming to attack the infantry, the Spanish chase them off the field. Traun stabilises his left flank, and leads his infantry into the attack against the Spanish. Meanwhile, Count Schulenberg regroups the Austrian cavalry on the Austrian right, and launches a counterattack against the Spanish cavalry. On the other flank Aspremont’s replacement, General Leutrum, leads his wing forward as well, smashing the Spanish right wing. Due to darkness it is necessary for both armies to withdraw the field. The Spanish back across the Panaro towards Bologna. Due to the smoke and darkness, many units lose their way. The 1st Guadalaxara marches in the direction of the advancing austro-sardian infantry columns, and it has to surrender after a short defence inside the walls of a farm.

Casualties in the battle are 1,755 dead, 1,307 wounded and 824 prisoners for the Spanish, while the Austro-Piedmontese lose 397 dead and 1,153 wounded or prisoners. Traun himself has two horses shot from under him during the battle.

De Gages retreats to Bologna but on March 26 he is also forced to retreat to Rimini. Despite this, the battle is widely considered a victory in Madrid, and de Gages is awarded a victory title, Count of Campo Santo. Following the battle, France promises support and co-operation with the Spanish, but for the moment Traun has saved North Italy for Maria Theresa.

Once again hundreds of Irishmen die many miles from home for “every cause but their own.”