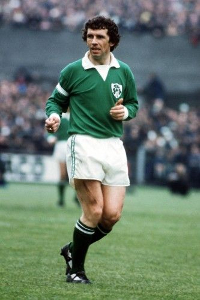 Michael John “Johnny” Giles, former association footballer and manager, is born in Ormond Square, Dublin, on November 6, 1940. He is best remembered for his time as a midfielder with Leeds United F.C. in the 1960s and 1970s. After retiring from management in 1985, Giles serves as the senior analyst on RTÉ Sport‘s coverage of association football from 1986 until 2016. The Football Association of Ireland (FAI) votes Giles as the greatest Irish player of the last 50 years at the UEFA Jubilee Awards in 2004.

After winning an FA Cup winner’s medal under Matt Busby at Manchester United F.C., Giles moves to Leeds in 1963 where he plays in midfield alongside captain Billy Bremner. The duo goes on to form a central midfield partnership which is one of the best in English club football. Their pairing helps yield several major trophies in the most successful era in Leeds’ history. By a strange coincidence, Giles and Bremner both score exactly 115 goals for the club.

In his later years in football, Giles pursues a managerial career which sees him installed as player-manager and manager of, among others, West Bromwich Albion F.C., the Republic of Ireland national football team, Vancouver Whitecaps F.C. and Shamrock Rovers F.C. Despite having an outstanding knowledge of the game, Giles personally never likes being a manager. He becomes disillusioned with aspects of the job, such as suffering at the hands of non-committal boardrooms, and leaves management permanently in 1985. He later declares that he has no regrets about quitting managerial life.

Subsequently, after repeated encouragement from childhood friend Eamon Dunphy, Giles inadvertently enters the world of football punditry in 1986. He goes on to establish himself as the highly respected senior analyst on RTÉ Sport. In addition, he writes two columns per week for the Irish Evening Herald newspaper, and offers his opinions about the game on radio station, Newstalk 106.

Giles resides in the Harborne area of the city of Birmingham, England. To coincide with his 70th birthday, Giles compiles a first ever autobiography chronicling his life in and outside of football which is released in November 2010. The autobiography, titled A Football Man, becomes the best selling book in the Republic of Ireland.