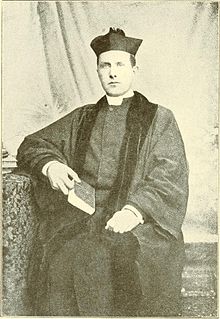 Michael Patrick O’Hickey, Irish Catholic priest and professor of Irish at St. Patrick’s College, Maynooth and an Irish language campaigner, is born in Carrickbeg, County Waterford on March 12, 1860. Sometimes his name appears as Michael Hickey rather than Micheal O’Hickey, or even in Irish as An tAthair Micheál Ó hIcí.

O’Hickey’s mother dies at an early age and his father remarries. He has an older brother Martin, and a younger half brother Maurice. He studies for the priesthood in St. John’s College, Waterford, and is ordained a priest in 1884. He is an active member of the Conradh na Gaeilge and studies under the noted Irish scholar Sean Plemion.

In 1896 O’Hickey is appointed Professor of Irish in Maynooth College, succeeding Fr. Eugene O’Growney. After clashing with the bishops and establishment, he is dismissed in 1909 from his position as Professor of Irish, for his conduct in the controversy over Irish as a matriculation subject for the new National University of Ireland.

O’Hickey receives support from many Irish nationalists (including Patrick Pearse whom he earlier had disagreements with), Irish language activists, and some of his colleagues including Maynooth’s Theology Professor, Walter McDonald. He appeals his dismissal to the Vatican, but his appeal is refused.