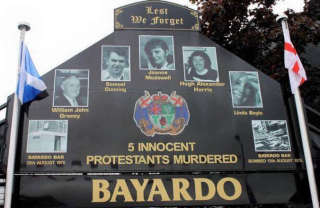 The Bayardo Bar attack takes place on August 13, 1975 in Belfast as a unit of the Provisional Irish Republican Army (IRA), led by Brendan McFarlane, launch a bombing and shooting attack on a pub on Aberdeen Street, in the loyalist Shankill Road area of the city.

By 1975, the conflict in Northern Ireland known as “the Troubles” is more than six years old. On February 10, 1975, the Provisional IRA and the British government enter into a truce and restart negotiations. There is a rise in sectarian killings during the truce, which ‘officially’ lasts until early 1976. The truce, however, is interrupted in the early hours of July 31, 1975 by the Miami Showband killings at Buskhill outside Newry, County Down.

Two weeks later, on August 13, 1975, the Bayardo Bar is crowded with people of all ages. Shortly before closing time a stolen green Audi automobile, containing a three-man unit of the IRA’s Belfast Brigade, pulls up outside. It is driven by the unit’s leader Brendan “Bik” McFarlane, a 24-year-old volunteer from Ardoyne. Volunteers Seamus Clarke and Peter “Skeet” Hamilton get out and approach the pub’s side entrance on Aberdeen Street. One of them immediately opens fire with an ArmaLite, instantly killing doorman William Gracey and his brother-in-law Samuel Gunning, with whom he had been chatting outside. The other volunteer then enters the pub, where patrons are drinking and singing, and drops a duffel bag containing a ten-pound bomb at the entrance. Both men make their getaway back to the waiting car. As panicked customers run to the toilets for safety, the bomb explodes and brings down a section of the old brick-and-plaster building upon them. The bodies of civilian Joanne McDowell and UVF member Hugh Harris are later found beneath the rubble of fallen masonry. Seventeen-year-old civilian Linda Boyle is pulled out alive, but dies of her injuries at the hospital on August 21. Over 50 people are injured in the attack.

A Belfast Telegraph article later claims that, as the IRA unit drives away down Agnes Street, they fire into a crowd of women and children queuing at a taxi rank although there are no fatalities. Within 20 minutes of the blast, the IRA unit is arrested after their car is stopped at a roadblock. The ArmaLite that had been used to kill Gracey and Gunning is found inside the car along with spent bullet casings and fingerprints belonging to the three IRA men.

The IRA does not initially claim responsibility, however, IRA members later state that the Bayardo was attacked because it was a pub where Ulster Volunteer Force (UVF) members met and planned terrorist assaults against nationalists. The pub is in the UVF-dominated middle Shankill Road area, and the Ulster Banner is displayed from its upper windows. A former IRA prisoner claims that fellow inmate Lenny Murphy told him he had left the Bayardo ten minutes before the attack and that the Brigade Staff had just finished holding a meeting there.

Loyalists, especially the UVF, respond with another wave of sectarian attacks against Catholics. Two days after the pub attack, a loyalist car bomb explodes without warning on the Falls Road, injuring 35 people. On 22 August, the UVF launches a gun and bomb attack on McGleenan’s Bar in Armagh. The attack is strikingly similar to that at Bayardo. One gunman opens fire while another plants the bomb, the explosion causing the building to collapse. Three Catholic civilians are killed and several more are wounded. That same night, another bomb wrecks a Catholic-owned pub in nearby Blackwatertown, although there are no injuries.

In May 1976, Brendan McFarlane, Seamus Clarke, and Peter Hamilton are convicted in a non-jury Diplock court and sentenced to life imprisonment inside the HM Prison Maze for carrying out the Bayardo murders. In 1983 McFarlane leads the Maze Prison escape, a mass break-out of 38 republican prisoners, including Clarke and Hamilton.