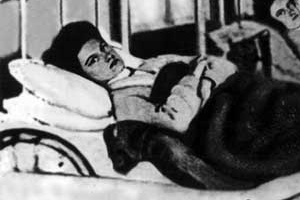 Mary Mallon, better known as Typhoid Mary, the first person in the United States identified as an asymptomatic carrier of the pathogen associated with typhoid fever, is placed in quarantine on March 27, 1869, where she remains for the rest of her life.

Mallon is presumed to have infected 51 people, three of whom die, over the course of her career as a cook. She is twice forcibly isolated by public health authorities and dies after a total of nearly three decades in isolation.

Mallon is born on September 23, 1869, in Cookstown, County Tyrone in what is now Northern Ireland. She immigrates to the United States in 1883 at the age of fifteen and lives with her aunt and uncle.

From 1900 to 1907, Mallon works as a cook in the New York City area for seven families. In 1900, she works in Mamaroneck, New York, where, within two weeks of her employment, residents develop typhoid fever. In 1901, she moves to Manhattan, where members of the family for whom she works develop fevers and diarrhea, and the laundress dies. Mallon then goes to work for a lawyer but leaves after seven of the eight people in that household become ill.

In 1906, Mallon takes a position in Oyster Bay, Long Island, and within two weeks ten of the eleven family members are hospitalized with typhoid. She changes jobs again and similar occurrences happen in three more households. She works as a cook for the family of a wealthy New York banker, Charles Henry Warren. When the Warrens rent a house in Oyster Bay for the summer of 1906, Mallon goes along as well. From August 27 to September 3, six of the eleven people in the family come down with typhoid fever. The disease at that time is “unusual” in Oyster Bay, according to three medical doctors who practice there. Mallon is subsequently hired by other families and outbreaks follow her.

In late 1906, one family hires a typhoid researcher named George Soper to investigate. Soper publishes the results on June 15, 1907, in the Journal of the American Medical Association. He believes Mallon might be the source of the outbreak but she repeatedly turns him away.

The New York City Health Inspector determines her to be a carrier. Under sections 1169 and 1170 of the Greater New York Charter, Mallon is held in isolation for three years at a clinic located on North Brother Island.

Upon her release, Mallon is given a job as a laundress. In 1915, Mallon starts another major outbreak, this time at Sloane Hospital for Women in New York City. Twenty-five people are infected and two die. She again leaves, but the police are able to locate and arrest her when she brings food to a friend on Long Island. After arresting her, public health authorities return her to quarantine on North Brother Island on March 27, 1915.

Mallon spends the rest of her life in quarantine at the Riverside Hospital. Six years before her death, she is paralyzed by a stroke. She dies in North Brother Island, East River, New York, on November 11, 1938 of pneumonia. An autopsy finds evidence of live typhoid bacteria in her gallbladder. Mallon’s body is cremated and her ashes are buried at Saint Raymond’s Cemetery in the Bronx.

One thought on ““Typhoid Mary” Placed in Quarantine”