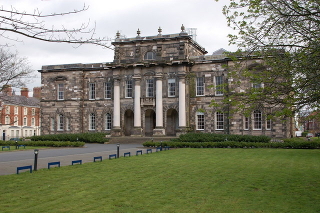 Assembly’s College, Belfast, opens for the training of Presbyterian clergy on December 5, 1853.

The Renaissance Revival style building with its grand Doric porch and Baroque attic is designed by Sir Charles Lanyon, the architect of the main building at Queen’s University Belfast and built with Scrabo stone at a cost of £5,000. Jean-Henri Merle d’Aubigné of Geneva participates in the opening ceremony alongside Henry Cooke, President of the Faculty. The five other professors in the new college are John Edgar, Robert Wilson, William Dool Killen, James G. Murphy and William Gibson.

There is a large influx of students in the wake of the 1859 Ulster revival and the south wing with its dining hall and student accommodations is added in 1869. Princeton Theological Seminary has an important influence in the shaping of the ethos of the College during this period as the Reverend Roberts Watts, who is appointed Professor of Systematic Theology in 1866, hopes to make “Belfast another Princeton.” The north wing with its wood-panelled chapel is designed by John Lanyon, son of original architect, and completed in 1881. The first degrees under the Royal Charter are conferred in 1883. However, the death of Watts in 1895 marks the beginning of the end of the Princetonian influence. A partial union takes place between the faculties in Belfast and Magee in 1922.

The newly formed Parliament of Northern Ireland meets in Assembly’s College from 1921 until 1932 while Stormont is being built with the House of Commons meeting in the Gamble Library and the Senate in the College chapel. During this period the College conducts classes in a house and provides library resources in a house on University Square. In 1926 the College becomes a Recognised College of Queen’s University. During this period the College comes under criticism for its embrace of theological liberalism. This culminates in a charge of heresy being brought against Professor James Ernest Davey in 1926-27. The College officially reopens in October 1932 and the inaugural lecture is delivered by the Scottish Historian Robert Rait.

Between 1941 and 1948 the Royal Ulster Constabulary, the city police, use the College as its own headquarters are bombed in the Belfast Blitz. In 1953, to mark the College’s centenary year, Prof. Davey is elected Moderator of the General Assembly.

In 1976 theological teaching at Magee College in Derry, County Londonderry, ceases and the two colleges amalgamate in 1978. The new college, constituted by an Act of Parliament, is named Union Theological College.

Today Union Theological College offers a full range of courses in Theology. The professors of the College constitute the Presbyterian Theological Faculty Ireland (PTFI) which was granted a Royal Charter in 1881 to confer academic degrees. The PTFI still awards degrees, diplomas and certificates. The majority of students are enrolled for degrees and diplomas, undergraduate and postgraduate, through the Institute of Theology of the Queen’s University of Belfast, in particular the BTh, BD, MTh and PhD.