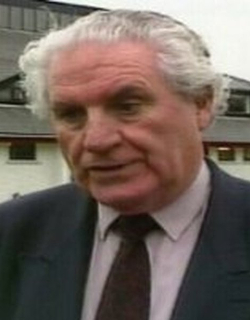 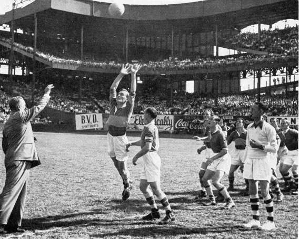 For the first and only time, the All-Ireland Senior Football Championship Final is played outside Ireland on September 14, 1947, at the Polo Grounds in Upper Manhattan, New York City, to cater for the large Irish-American community there.

The New York final matching Cavan against Kerry is also intended to observe the centenary of the Great Famine that triggered mass Irish emigration to the United States and other countries. Around 30,000 people are in attendance for the final. Cavan travels to the U.S. by air and Kerry by sea. The Ulster team credits their victory partially to their shorter time spent travelling. The Cavan team flight, via the Azores, takes 30 hours. Kerry’s trip by Ocean Liner takes far longer.

Mick Higgins, a key member of the Cavan team that day, recalls later in life, “There was no huge send-off for us in Cavan, but both teams got a good reception in New York when we arrived. I remember the team stayed in the Commodore Hotel, but I stayed with my relatives.” He also remembers the “oppressive heat” during the game itself.

After a slow start, Cavan fights back to lead 2-5 to 2-4 at the break and goes on to win by four points. Peter Donohoe scores eight points from frees and is called “the Babe Ruth of Gaelic football” in the New York press. The match commentary was broadcast by radio across the Atlantic Ocean by Michael O’Hehir.

The Cavan team returns to Ireland aboard the RMS Queen Mary. Higgins recalls, “It was only after we arrived in Southampton that we realised the joy of it all. Large numbers of Cavan people turned up to see us in London and Birmingham. We were treated like kings in Cavan.”