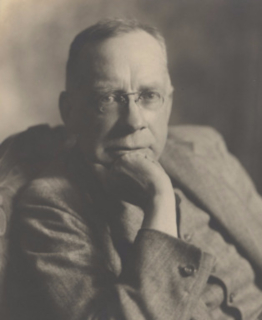 Forrest Reid, novelist, literary critic and translator, is born in Belfast on June 24, 1875. He is, along with Hugh Walpole and J. M. Barrie, a leading pre-war novelist of boyhood. He is still acclaimed as the greatest of Ulster novelists and is recognised with the award of the 1944 James Tait Black Memorial Prize for his novel Young Tom.

Reid is the youngest son of a Protestant family of twelve, six of whom survive. His mother, his father’s second wife, comes from an aristocratic Shropshire family. Although proud of this ancestry, he finds the strict Protestant ethics of his immediate family constricting. He is educated at the Royal Belfast Academical Institution, after which he is initially apprenticed into the Belfast tea-trade before going to Christ’s College, Cambridge, where he reads medieval and modern languages, and is influenced by the novelist E. M. Forster. His first book, The Kingdom of Twilight, is published in 1904. Following graduation in 1908, he returns to Belfast to pursue a writing career.

As well as his fiction, Reid also translates poems from the Greek Anthology. His study of the work of W. B. Yeats, W. B. Yeats: A Critical Study, has been acclaimed as one of the best critical studies of that poet. He also writes the definitive work on the English woodcut artists of the 1860s, Illustrators of the Sixties (1928). His collection of original illustrations from that time is housed in the Ashmolean Museum, Oxford.

Reid is a close friend of Walter de la Mare, whom he first meets in 1913, and about whose fiction he publishes a perceptive book in 1929. He is also an influence on novelist Stephen Gilbert, and has good connections to the Bloomsbury Group of writers. He is a founding member of the Imperial Art League (later the Artists League of Great Britain) and is also a close friend of Arthur Greeves, the artist known to be C. S. Lewis‘s best friend. Greeves paints several portraits of Reid, now all in the possession of the Royal Belfast Academical Institution.

Reid publishes articles in many magazines, including Uladh, The Westminster Review and the Ulster Review, and he reviews books for The Manchester Guardian. Apostate, an autobiography, is published in 1926, and its sequel, Private Road, is published in 1940. He is a founder member of the Irish Academy of Letters.

Though Reid’s books are not necessarily well known today, he has been labelled “the first Ulster novelist of European stature,” and comparisons have been drawn between his own coming of age novel of Protestant Belfast, Following Darkness (1912), and James Joyce‘s seminal novel of growing up in Catholic Dublin, A Portrait of the Artist as a Young Man (1914). Reid’s fiction, which often uses submerged narratives to explore male beauty and love, can be placed within the historical context of the emergence of a more explicit expression of homosexuality in English literature in the 20th century.

A ‘Forrest Reid Collection’ is held at the University of Exeter, consisting of first editions of all Reid’s works and books about him. Many of his original manuscripts are in the archives of the Belfast Central Library. In 2008, Queen’s University Belfast catalogues a large collection of Forrest Reid documentary material including many letters from E. M. Forster.

In 1952 Forster travels to Belfast to unveil a plaque commemorating Forrest Reid’s life at 13 Ormiston Crescent.