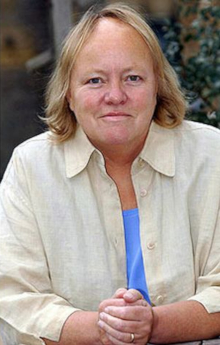 Marjorie “Mo” Mowlam, English Labour Party politician, is presented with the International Woman of the Year Award at a ceremony in Dublin on October 23, 2001. United Nations High Commissioner for Human Rights Mary Robinson wins the Overall Award at the Irish Tatler Women of the Year Awards.

Mowlam is born on September 18, 1949 in Watford, Hertfordshire, England but grows up in Coventry. She starts her education at Chiswick Girls’ grammar school in West London, then moves to Coundon Court school in Coventry which, at the time, is one of the first comprehensive schools in the country. She then studies at Trevelyan College, Durham University, reading sociology and anthropology. She joins the Labour Party in her first year.

Mowlam becomes the Secretary of the Durham Union Society in 1969 and later goes on to become the Vice-President of the Durham Student’s Union. She works for then-MP Tony Benn in London and American writer Alvin Toffler in New York, moving to the United States with her then-boyfriend and studying for a PhD in political science at the University of Iowa.

Mowlam is a lecturer in the Political Science Department at the University of Wisconsin–Milwaukee in 1977 and at Florida State University in Tallahassee from 1977 to 1979. During her time in Tallahassee, someone breaks into her apartment. She suspects that it is Ted Bundy, the serial killer and rapist who is thought to have murdered at least 35 young women and attacked several others. She returns to England in 1979 to take up an appointment at the University of Newcastle upon Tyne.

Having failed to win selection for the 1983 general election, Mowlam is selected as Labour candidate for the safe seat of Redcar after James Tinn stands down. She takes the seat in the 1987 general election, becoming the Labour spokesperson on Northern Ireland later that year. Together with Shadow Chancellor John Smith, she is one of the architects of Labour’s “Prawn Cocktail Offensive” dedicated to reassuring the UK’s financial sector about Labour’s financial rectitude.

Mowlam joins the Shadow Cabinet when John Smith becomes leader of the Labour Party in 1992, holding the title of Shadow Secretary of State for National Heritage. During this time, she antagonises both monarchists and republicans by calling for Buckingham Palace to be demolished and replaced by a “modern” palace built at public expense. Later, her willingness to speak her mind, often without regard to the consequences, is seen as her greatest strength by her supporters.

Following Smith’s death in 1994, Mowlam, alongside Peter Kilfoyle, becomes a principal organiser of Tony Blair‘s campaign for the Labour leadership. After his victory, Blair makes her Shadow Secretary of State for Northern Ireland. She initially resists being appointed to the position, preferring an economic portfolio, but, after accepting it, she throws her weight into the job.

Mowlam oversees the negotiations which lead to the 1998 Good Friday Agreement. She is successful in helping to restore an Irish Republican Army (IRA) ceasefire and including Sinn Féin in multi-party talks about the future of Northern Ireland. In an attempt to persuade the Ulster loyalists to participate in the peace process, she pays an unprecedented and potentially dangerous visit to loyalist prisoners in HM Prison Maze, meeting convicted murderers face-to-face and unaccompanied.

Mowlam witnesses the Good Friday Agreement signing in 1998, which leads to the temporary establishment of a devolved power-sharing Northern Ireland Assembly. However, an increasingly difficult relationship with Unionist parties means her role in the talks is ultimately taken over by Tony Blair and his staff.

Mowlam’s deteriorating relationship with Unionists is the key reason she is replaced by Peter Mandelson as Northern Ireland Secretary in October 1999. Her move to the relatively lowly position of Minister for the Cabinet Office possibly involves other factors, notably her health and her popularity. On September 4, 2000, she announces her intention to retire from Parliament and relinquishes her seat at the 2001 general election.

Five months before the 1997 general election, Mowlam is diagnosed with a brain tumor, a fact that she tries to keep private. She appears to suffer from balance problems as a result of her radiotherapy. According to her husband, she falls on July 30, 2005, receiving head injuries and never regaining consciousness. Her living will, in which she asks not to be resuscitated, is honoured. On August 12, 2005, Mowlan is moved to Pilgrims Hospice in Canterbury, Kent, where she dies seven days later, on August 19, 2005, aged 55.

Mowlam is an atheist and is cremated in Sittingbourne on September 1, 2005 at a non-religious service conducted by Reverend Richard Coles, formerly of the 1980s band The Communards. Half of her ashes were scattered at Hillsborough Castle, the Secretary of State for Northern Ireland’s official residence, and the other half in her former parliamentary constituency of Redcar.