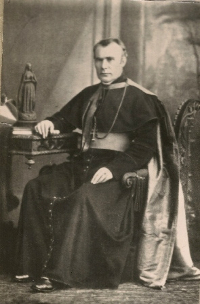 Thomas William Croke, the second Catholic Bishop of Auckland in New Zealand (1870–74) and later Archbishop of Cashel and Emly in Ireland, dies on July 22, 1902. He is important in the Irish nationalist movement especially as a Champion of the Irish National Land League in the 1880s. The main Gaelic Athletic Association stadium in Dublin is named Croke Park in his honour.

Croke is born in Castlecor, County Cork, on May 28, 1824. He is educated in Charleville, County Cork, the Irish College in Paris and the Pontifical Irish College in Rome, winning academic distinctions including a doctorate of divinity with honours. He is ordained in May 1847. Returning to Ireland for a short time he is appointed a Professor in St. Patrick’s, Carlow College. The Irish radical William O’Brien says that Croke fought on the barricades in Paris during the French Revolution of 1848. Croke returns to Ireland and spends the next 23 years working there. In 1858 he becomes the first president of St. Colman’s College, Fermoy, County Cork and then serves as both parish priest of Doneraile and Vicar General of Cloyne diocese from 1866 to 1870. Croke attends the First Vatican Council as the theologian to the Bishop of Cloyne 1870.

Croke gains the good opinion of the Irish ecclesiastical authorities and is rewarded in 1870 by his promotion to Bishop of Auckland in New Zealand. His former professor, Paul Cullen, by then Cardinal Archbishop of Dublin, is largely responsible for filling the Australasian Catholic church with fellow Irishmen. His strong recommendations lead to Croke’s appointment. Croke arrives at Auckland on December 17, 1870 on the City of Melbourne. During his three years as bishop he restores firm leadership to a diocese left in disarray by his predecessor, Bishop Jean Baptiste Pompallier. He devotes some of his considerable personal wealth to rebuilding diocesan finances and also takes advantage of Auckland’s economic growth following the development of the Thames goldfields to further his aims, ensuring that all surplus income from parishes at Thames and Coromandel is passed on to him, and he institutes a more rigorous system for the Sunday collection at St. Patrick’s Cathedral. He imports Irish clergy to serve the growing Catholic community, and with Patrick Moran, the first Catholic Bishop of the Diocese of Dunedin, he tries unsuccessfully to secure an Irish monopoly on future episcopal appointments in New Zealand. Croke supports separate Catholic schools and their right to state aid, and voices his opposition to secular education as Auckland’s Catholic schools are threatened by the provincial council’s Education Act 1872, which helps to create a free, secular and compulsory education system. However, generally, Croke’s image is uncontroversial. On January 28, 1874, after barely three years in office, Croke departs for Europe, on what is ostensibly a 12-month holiday and he does not return to New Zealand.

Croke becomes a member of the Irish hierarchy when he is translated to be Archbishop of Cashel, one of the four Catholic Irish archbishoprics in 1875. Archbishop Croke is a strong supporter of Irish nationalism, aligning himself with the Irish National Land League during the Land War, and with the chairman of the Irish Parliamentary Party, Charles Stewart Parnell. In an 1887 interview he explains that he had opposed the League’s “No rent manifesto” in 1881, preferring to stop payment of all taxes.

Croke also associates himself with the Temperance Movement of Fr. Theobald Mathew and Gaelic League from its foundation in 1893. Within Catholicism he is a supporter of Gallicanism, as opposed to the Ultramontanism favoured by the Archbishop of Dublin, Cardinal Cullen. His support of nationalism causes successive British governments and Lord Lieutenant of Ireland‘s governments in Dublin to be deeply suspicious of him, as are some less politically aligned Irish bishops.

Thomas Croke, 78, dies at the Archbishop’s Palace in Thurles, County Tipperary on July 22, 1902. He is buried at the Cathedral of the Assumption in Thurles. In honour of Croke, his successors as Archbishop of Cashel and Emly traditionally are asked to throw in the ball at the minor Gaelic football and All-Ireland Senior Hurling Championship finals.