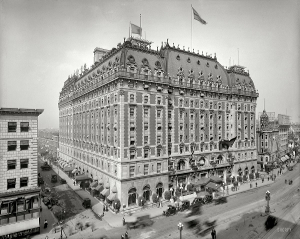 The 1916 convention, comprising 2,300 delegates at the Hotel Astor, is held six weeks before the Easter Rising, and considers the division between the home Rule parties and the more militant nationalists. The Rising would be supported by Clan na Gael, but other members remain hopeful that the 1914 Home Rule Act, which had been passed but suspended during World War I, might work.

A majority at the convention support the American policy of neutrality during the war, and are opposed to any alliance with Britain. Woodrow Wilson wins the United States presidential election in 1916 with help from Irish Americans and his campaign slogan of “He kept us out of War.”

An important result is the formation of the “Friends of Irish Freedom” that work as a coordinating body to support “the independence of Ireland, the industrial development of Ireland, the use and sale of Irish products, and to revive Irish culture.”

(Pictured: Hotel Astor, located in the Times Square area of Manhattan, New York City. The hotel was demolished in 1967 and replaced with the 54-story high-rise office tower One Astor Plaza.)