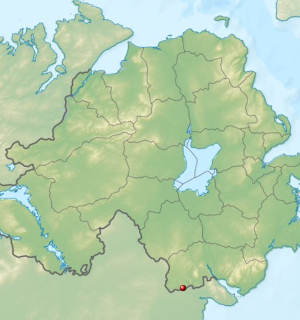 The Glasdrumman ambush, an attack by the South Armagh Brigade of the Provisional Irish Republican Army (IRA) against a British Army observation post, takes place on July 17, 1981 at a scrapyard in Glasdrumman, County Armagh, southwest of Crossmaglen.

On May 6, 1981, a day after the death of hunger-striker Bobby Sands, one IRA member from a three-man unit is arrested while trying to set up a roadblock east of the main Belfast-Dublin road by twelve members of the Royal Green Jackets, divided in three teams. A second volunteer crosses the border, only to be arrested by the Irish Army. The third IRA man escapes, apparently injured. A total of 689 rounds are fired by the soldiers.

After this initial success, the British Army continues these tactics. On July 16, another operation is carried out by eighteen Royal Green Jackets soldiers. That night, four concealed positions – Alpha, Bravo, Charlie and Delta – are inserted into the Glassdrumman area, around a scrapyard along the border. The plan is that another unit, called the triggering team, would ambush any IRA unit on sight, while the other four would block the expected escape routes. On July 17, the commanders in charge of Alpha and Delta teams, suspecting that the operation has been compromised by the presence of local civilians, orders the withdrawal of their men. Shortly thereafter, Bravo team is suddenly engaged by automatic fire from an M60 machine gun and AR-15 rifles fired by six or seven IRA members. The concealed position, emplaced inside a derelict van, is riddled by more than 250 bullets. The team’s leader, Lance Corporal Gavin Dean, is killed instantly and one of his men, Rifleman John Moore, is seriously wounded. Moore is later awarded the Military Medal. The IRA members fire their weapons from across the border, 160 yards away.

British army commanders conclude that “it was not worth risking the lives of soldiers to prevent an IRA roadblock being set up.” The incident also exposes the difficulties of concealing operations from local civilians in South Armagh, whose sympathy with the IRA is manifest. Several years later, the IRA would repeat its success against undercover observation posts in the course of Operation Conservation in 1990.