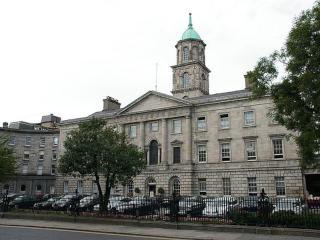 The foundation stone of the Rotunda Hospital, a maternity hospital in Parnell Street, Dublin, is laid by the Lord Mayor of Dublin on July 9, 1751.

The hospital is founded by Bartholomew Mosse, a surgeon and man-midwife who is appalled at the conditions that pregnant women have to endure, in George’s Lane as the Dublin Lying-In Hospital in March 1745. Lying-in is an archaic term for childbirth, referring to the month-long bed rest prescribed for postpartum confinement. The venture is very successful and Mosse raises money through concerts, exhibitions and even a lottery to establish larger premises.

The hospital moves to new premises, designed by Richard Cassels, where it becomes known as “The New Lying-In Hospital” in December 1757. The rotunda itself, which is designed by James Ensor, is completed just in time for a reception hosted by the Marquess of Kildare in October 1767. Extensive new rooms, designed by Richard Johnston and built adjacent to the rotunda, are completed in 1791.

Records indicate that around 1781, “when the hospital was imperfectly ventilated, every sixth child died within nine days after birth, of convulsive disease; and that after means of thorough ventilation had been adopted, the mortality of infants, within the same, in five succeeding years, was reduced to one in twenty.” This issue is not limited to the Lying-In-Hospital. In that era, ventilation improvement is a general issue in patient care, along with other issues of sanitation and hygiene, and the conditions in which surgeons such as Robert Liston in Britain and elsewhere, have to operate. Florence Nightingale famously works on the design of safe and healthy hospitals.

By the early 19th century the facility becomes known as the Rotunda Hospital, after its prominent architectural feature. The first Caesarean section in Ireland is undertaken at the hospital in 1889.

The Rotunda Hospital, as both a maternity hospital and also as a training centre (affiliated with Trinity College Dublin) is notable for having provided continuous service to mothers and babies since inception, making it the oldest continuously operating maternity hospital in the world. It is estimated that over 300,000 babies have been born there.