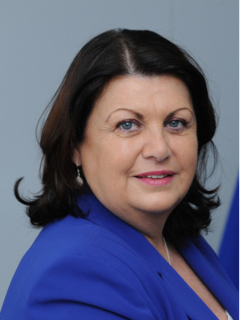 Máire Geoghegan-Quinn, former Fianna Fáil politician, is born in Carna, County Galway on September 5, 1950. She served as a European Commissioner for Research, Innovation and Science from 2010 to 2014 and as a Teachta Dála (TD) for the Galway West constituency from 1975 to 1997.

Geoghegan is educated at Coláiste Muire, Toormakeady, in County Mayo and at Carysfort College in Blackrock, from where she qualifies as a teacher. She is married to John Quinn, with whom she has two children. Her novel The Green Diamond, about four young women sharing a house in Dublin in the 1960s, is published in 1996.

Her father, Johnny Geoghegan, is a Fianna Fáil TD for Galway West from 1954 until his death in 1975. His daughter successfully contests the subsequent by-election. From 1977 to 1979 she works as Parliamentary Secretary at the Department of Industry, Commerce and Energy. She serves as a member of Galway City Council from 1985 to 1991.

Geoghegan-Quinn supports Charles Haughey in the 1979 Fianna Fáil leadership election and is subsequently appointed to the cabinet post of Minister for the Gaeltacht. Thus, she becomes the first woman to hold an Irish cabinet post since 1922 (after Constance Markievicz had been appointed Minister for Labour in 1919 during the First Dáil) and the first woman to hold such a post in the history of the Irish state.

In 1982, Geoghegan-Quinn is appointed Minister of State at the Department of Education and Skills. Her tenure is short because the 23rd Dáil lasts only 279 days, and a Fine Gael–Labour Party coalition is elected at the November 1982 general election.

When Fianna Fáil returns to power after the 1987 general election, Geoghegan-Quinn becomes Minister of State at the Department of the Taoiseach. She expects a senior government position, but is disappointed. She resigns in 1991, in opposition to Charles Haughey’s leadership of the party. The following year Albert Reynolds, whom she backs for the leadership, becomes Taoiseach and Fianna Fáil leader. For her loyalty to Reynolds, she is appointed Minister for Transport, Tourism and Sport. She becomes Minister for Justice and Equality in 1993, in which post she introduces substantial law reform legislation, including the decriminalisation of homosexuality. She is also briefly acting Minister for Equality and Law Reform in late 1994, following the resignation of Labour minister Mervyn Taylor from Reynolds’ coalition government.

When Reynolds resigns as leader of Fianna Fáil in November 1994, Geoghegan-Quinn is seen as his preferred successor. In the resulting leadership election she stands against Bertie Ahern. A win would make her the first female Taoiseach. On the day of the vote, however, she withdraws from the contest “in the interests of party unity.” It is reported that she has the support of only 15 members of the 66-strong parliamentary party.

At the 1997 general election Geoghegan-Quinn retires from politics completely, citing privacy issues, after details about her 17-year-old son’s expulsion from school appeared in the newspapers. Other reports suggest that she sees her prospects for promotion under Ahern as poor, and a weak showing in constituency opinion polls indicate her seat could be in danger. She becomes a non-executive director of Aer Lingus, a member of the board of the Declan Ganley-owned Ganley Group, and writes a column for The Irish Times.

Geoghegan-Quinn is appointed to the European Court of Auditors in 1999, replacing former Labour minister Barry Desmond. She is appointed for a second term at the Court of Auditors in March 2006, and resigns on February 9, 2010. She is nominated by Taoiseach Brian Cowen to become Ireland’s European Commissioner in November 2009, and is subsequently allocated the Research, Innovation and Science portfolio.

In April 2010, after numerous calls are made over several days for Geoghegan-Quinn to surrender her pensions as an Irish former politician, which are worth over €104,000, while she remains in a paid public office, she does so.

In July 2015, it is announced that Geoghegan-Quinn will chair an independent panel to examine issues of gender equality among Irish higher education staff.