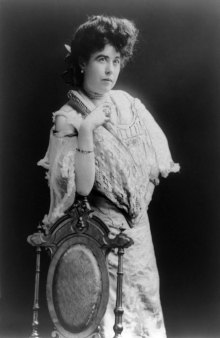 Margaret Brown (née Tobin), an American socialite and philanthropist posthumously known as “The Unsinkable Molly Brown”, dies in New York City on October 26, 1932. She is best remembered for unsuccessfully encouraging the crew in Lifeboat No. 6 to return to the debris field of the 1912 sinking of RMS Titanic to look for survivors. During her lifetime, her friends called her “Maggie”, but even by her death, obituaries refer to her as the “Unsinkable Mrs. Brown.” The reference is further reinforced by a 1960 Broadway musical based on her life and its 1964 film adaptation which are both entitled The Unsinkable Molly Brown.

Tobin is born in a hospital near the Mississippi River in Hannibal, Missouri, on what is now known as Denkler’s alley. Her parents are Irish Catholic immigrants. At age 18, she relocates to Leadville, Colorado, with her siblings Daniel Tobin, Mary Ann Collins Landrigan and Mary Ann’s husband John Landrigan. Margaret and her brother Daniel share a two-room log cabin and she finds a job in a department store.

In Leadville, she meets and marries James Joseph “J.J.” Brown (1854–1922), an enterprising, self-educated man, in Leadville’s Annunciation Church on September 1, 1886. They have two children.

The Brown family acquires great wealth when in 1893 J.J.’s mining engineering efforts prove instrumental in the production of a substantial ore seam at the Little Jonny Mine of his employers, Ibex Mining Company, and he is awarded 12,500 shares of stock and a seat on the board. In Leadville, Margaret helps by working in soup kitchens to assist miners’ families.

In 1894, the Browns purchase a $30,000 Victorian mansion in Denver and in 1897 they build a summer house, Avoca Lodge in Southwest Denver near Bear Creek, which gives the family more social opportunities. Margaret becomes a charter member of the Denver Woman’s Club, whose mission is the improvement of women’s lives by continuing education and philanthropy. After 23 years of marriage, Margaret and J.J. privately sign a separation agreement in 1909. Although they never reconcile, they continue to communicate and care for each other throughout their lives.

Brown spends the first months of 1912 traveling in Egypt as part of the John Jacob Astor IV party, until she receives word from Denver that her eldest grandchild, Lawrence Palmer Brown Jr., is seriously ill. She immediately books passage on the first available liner leaving for New York, the RMS Titanic. Originally her daughter Helen is supposed to accompany her, but she decides to stay on in Paris, where she is studying at the Sorbonne.

The RMS Titanic sinks in the early morning hours of April 15, 1912, after striking an iceberg. Brown helps others board the lifeboats but is finally persuaded to leave the ship in Lifeboat No. 6. Brown is later called “The Unsinkable Molly Brown” by authors because she helps in the ship’s evacuation, taking an oar herself in her lifeboat and urging that the lifeboat go back and save more people. After several attempts to urge Quartermaster Robert Hichens to turn back, she threatens to throw him overboard. Sources vary as to whether the boat goes back and if they find anyone alive. Brown’s efforts seal her place in history, regardless.

Upon being rescued by the RMS Carpathia, Brown proceeds to organize a survivors’ committee with other first-class survivors. The committee works to secure basic necessities for the second and third class survivors and even provides informal counseling.

Brown runs for the United States Senate in 1914 but ends her campaign to return to France to work with the American Committee for Devastated France during World War I.

During the last years of her life, Brown is an actress. She dies in her sleep on October 26, 1932, at the Barbizon Hotel in New York City, New York. Subsequent autopsy reveals a brain tumor. She is buried on October 31 alongside her husband in the Cemetery of the Holy Rood in Westbury, New York, following a small ceremony attended only by family members. There is no eulogy.