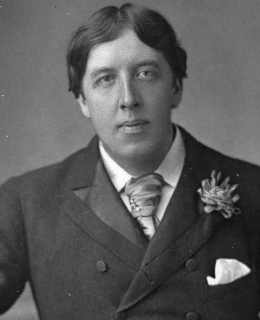 Oscar Fingal O’Flahertie Wills Wilde, Irish poet and playwright, dies in Paris, France on November 30, 1900. After writing in different forms throughout the 1880s, the early 1890s see him become one of the most popular playwrights in London. He is best remembered for his epigrams and plays, his novel The Picture of Dorian Gray, and the circumstances of his criminal conviction for “gross indecency,” imprisonment, and early death at age 46.

Wilde is born on October 16, 1854 at 21 Westland Row, Dublin (now home of the Oscar Wilde Centre, Trinity College), the second of three children born to Anglo-Irish Sir William Wilde and Jane Wilde, two years behind his brother William. His parents are successful Anglo-Irish intellectuals in Dublin. He learns to speak fluent French and German. At university, he reads Greats. He demonstrates himself to be an exceptional classicist, first at Trinity College Dublin, then at Magdalen College, Oxford. He becomes associated with the emerging philosophy of aestheticism, led by two of his tutors, Walter Pater and John Ruskin. After university, he moves to London into fashionable cultural and social circles.

As a spokesman for aestheticism, Wilde tries his hand at various literary activities: he publishes a book of poems, lectures in the United States and Canada on the new “English Renaissance in Art” and interior decoration, and then returns to London where he works prolifically as a journalist. Known for his biting wit, flamboyant dress and glittering conversational skill, he becomes one of the best-known personalities of his day.

At the turn of the 1890s, Wilde refines his ideas about the supremacy of art in a series of dialogues and essays, and incorporates themes of decadence, duplicity, and beauty into what would be his only novel, The Picture of Dorian Gray (1890). The opportunity to construct aesthetic details precisely, and combine them with larger social themes, draw him to write drama. He writes Salome (1891) in French while in Paris but it is refused a licence for England due to an absolute prohibition on the portrayal of Biblical subjects on the English stage. Unperturbed, he produces four society comedies in the early 1890s, which make him one of the most successful playwrights of late-Victorian London.

At the height of his fame and success, while The Importance of Being Earnest (1895) is still being performed in London, Wilde has John Douglas, 9th Marquess of Queensberry prosecuted for criminal libel. The Marquess is the father of Wilde’s lover, Lord Alfred Douglas. The libel trial unearths evidence that causes him to drop his charges and leads to his own arrest and trial for gross indecency with men. After two more trials he is convicted and sentenced to two years of hard labour, the maximum penalty, and is jailed from 1895 to 1897. During his last year in prison, he writes De Profundis, published posthumously in 1905, a long letter which discusses his spiritual journey through his trials, forming a dark counterpoint to his earlier philosophy of pleasure. On his release, he leaves immediately for France, never to return to Ireland or Britain. There he writes his last work, The Ballad of Reading Gaol (1898), a long poem commemorating the harsh rhythms of prison life.

By November 25, 1900 Wilde has developed meningitis, then called “cerebral meningitis”. On November 29, he is conditionally baptised into the Catholic Church by Fr. Cuthbert Dunne, a Passionist priest from Dublin. He dies of meningitis on November 30, 1900. Different opinions are given as to the cause of the disease. Richard Ellmann claims it is syphilitic. Merlin Holland, Wilde’s grandson, believes this to be a misconception, noting that Wilde’s meningitis followed a surgical intervention, perhaps a mastoidectomy. Wilde’s physicians, Dr. Paul Cleiss and A’Court Tucker, report that the condition stems from an old suppuration of the right ear treated for several years and makes no allusion to syphilis.

Wilde is initially buried in the Cimetière parisien de Bagneux outside Paris. In 1909 his remains are disinterred and transferred to Père Lachaise Cemetery, inside the city. In 2011, the tomb is cleaned of the many lipstick marks left there by admirers and a glass barrier is installed to prevent further marks or damage.

In 2017, Wilde is among an estimated 50,000 men who are pardoned for homosexual acts that are no longer considered offences under the Policing and Crime Act 2017. The Act is known informally as the Alan Turing law.

In 2014 Wilde is one of the inaugural honorees in the Rainbow Honor Walk, a walk of fame in San Francisco’s Castro District noting LGBTQ people who have “made significant contributions in their fields.”