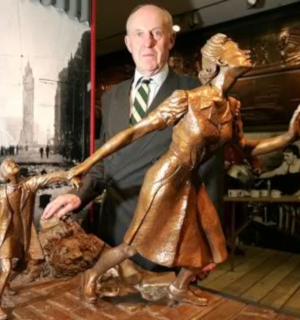 Hughes is educated at North Richmond Street CBS. He enters the Metropolitan School of Art in Dublin in 1878 and trains as a part-time student for ten years. In 1890 he wins a scholarship to the South Kensington School of Art in London, after which another scholarship takes him to Paris, France. He then studies further in Italy.

Hughes is appointed as teacher to the Metropolitan School of Art in Dublin in 1894 and in 1902 becomes Professor of Sculpture in the Royal Hibernian Academy School. His last residence in Dublin is at 28 Lennox Street, Portobello.

Hughes’s influences are mainly from the Italian Renaissance and include: