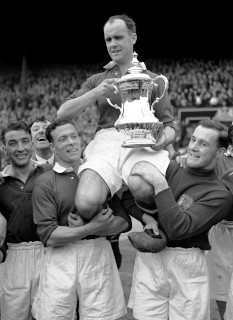 Carey is born in Dublin on February 23, 1919. As a schoolboy, he plays football for Home Farm F.C. As a youth, he also plays Gaelic football and is selected to represent Dublin GAA at minor level before he signs for St. James’s Gate F.C. at the start of the 1936–1937 season.

After just two months of League of Ireland football, he is spotted by Billy Behan, a Dublin-based Manchester United scout. In November 1936 United signs him for a then League of Ireland record fee of £250. He makes his debut as an inside left for United on September 23, 1937 against Southampton F.C. During his first season with United, Carey, together with Harry Baird, Jack Rowley, Tommy Bamford, Tommy Breen and Stan Pearson, help United gain promotion to the First Division.

As a player Carey spends most of his career with Manchester United, where he is team captain from 1946 until he retires as a player in 1953. He also plays as a guest for several other clubs including Cardiff City F.C., Manchester City F.C., Everton F.C., Liverpool F.C. and Middlesbrough F.C.

Carey is also a dual internationalist, playing for and captaining both Ireland teams – the FAI XI and the IFA XI. In 1947 he also captains a Europe XI which plays a Great Britain XI at Hampden Park. In 1949 he is voted the Football Writers’ Association Footballer of the Year and in the same year captains the FAI XI that defeats England 2–0 at Goodison Park, becoming the first non-UK team to beat England at home.

Carey is also the first non-UK player and the first Irishman to captain a winning team in both an FA Cup Final and the First Division. Like his contemporary Con Martin, he is an extremely versatile footballer and plays in nine different positions throughout his career. He even plays in goal for United on one occasion.

(Pictured: Manchester United captain Johnny Carey is carried on the shoulders of his teammates, after they win the FA Cup final of 1948 against Blackpool. Date: April 24, 1948)