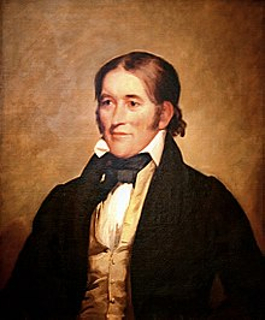 David “Davy” Crockett, 19th-century American folk hero, frontiersman, soldier, and politician, is born in Limestone, Greene County, North Carolina on August 17, 1786. He is commonly referred to in popular culture by the epithet “King of the Wild Frontier.” He represents Tennessee in the U.S. House of Representatives and serves in the Texas Revolution.

The Crockett family is of mostly French–Huguenot ancestry, although the family settles in Ireland before migrating to the Americas. Crockett is born in what is now Greene County, Tennessee (at the time part of North Carolina), close to the Nolichucky River and near the community of Limestone. He grows up in East Tennessee, where he gains a reputation for hunting and storytelling.

Crockett is made a colonel in the militia of Lawrence County, Tennessee and is elected to the Tennessee state legislature in 1821. In 1827, he is elected to the United States Congress where he vehemently opposes many of the policies of President Andrew Jackson, especially the Indian Removal Act. His opposition to Jackson’s policies leads to his defeat in the 1831 elections. He is re-elected in 1833, then narrowly loses in 1835, prompting his angry departure shortly thereafter to Texas, then the Mexican state of Tejas.

All that is certain about the fate of Crockett is that he dies fighting in the Battle of the Alamo in the Texas Revolution on the morning of March 6, 1836. According to many accounts, between five and seven Texans surrender during the battle, possibly to General Manuel Fernández Castrillón. General Antonio López de Santa Anna has ordered the Mexicans to take no prisoners, and he is incensed that those orders have been ignored. He demands the immediate execution of the survivors, but Castrillon and several other officers refuse to do so. Staff officers who had not participated in the fighting draw their swords and kill the unarmed Texians.

Crockett becomes famous during his lifetime for larger-than-life exploits popularized by stage plays and almanacs. After his death, he continues to be credited with acts of mythical proportion. In the 20th century these lead to television and movie portrayals, and he becomes one of the best-known American folk heroes.