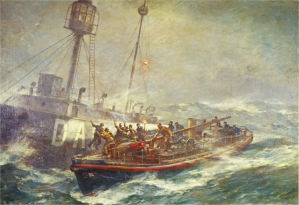 The Ballycotton lifeboat Mary Stanford returns to its home port in East Cork on February 11, 1936 following what is likely the most famous sea rescue in Irish maritime history.

Riding at anchor, the Daunt Rock lightship Comet, with a crew of eight, breaks from her mooring off Roberts Head on the southern coast of Ireland on the morning of February 8, 1936 during a three-day gale. The seas are so mountainous that spray is flying over the lantern of the 196-foot tall lighthouse.

In one of the most exhausting and gallant services in the history of the Royal National Lifeboat Institute (RNLI), Patrick Sliney, Coxswain of the Mary Stanford, and a crew of six take to the sea in response to an SOS call from the Comet.

The Mary Stanford makes several attempts to get a steel cable aboard the Comet, but on every attempt, a terrible wave crashes the ships further apart and the cable snaps. When darkness falls, the Mary Stanford heads for Cobh to get stronger cables. Early the following morning, the Mary Stanford returns to Daunt rock. The sea is just as stormy and a thick fog has set in, making it impossible to effect a rescue. The Mary Stanford remains in the storm all day and all night.

That evening, as the storm increases, the Comet drifts dangerously close to Daunt rock. When she is just 60 yards from the rock, Sliney decides the only option, albeit a dangerous one, is to try and get alongside the Comet so the crew can jump for the lifeboat. On the first attempt, one man jumps to safety aboard the Mary Stanford. No one is able to jump on the second attempt but on the third attempt five men are successfully rescued. A fourth and fifth attempt are unsuccessful as no one is able to jump to the Mary Stanford. Two men remain on board the Comet, clinging to the rails and too exhausted to jump. As the Mary Stanford comes alongside on the sixth attempt, the two are seized by the lifeboat crew and dragged aboard.

The Mary Stanford is away from its Ballycotton station for 79 hours and at sea for 49 hours. The crew has no food for 25 hours and they only have three hours sleep. All suffer from colds, saltwater burns, and hunger.