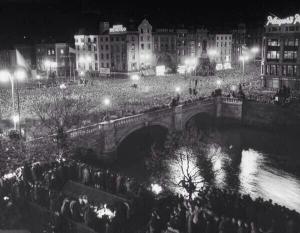 Since December 1922 Ireland, apart from the six counties in the north, has been the Irish Free State, a British Dominion established by the Anglo-Irish Treaty of 1922. The partition leads to the civil war in Ireland that carries on into 1923, with Éamon de Valera leading the Irish Republican Army who are vehemently against the division of their country.

By 1927, however, de Valera has been brought into government and becomes Prime Minister in 1932, changing the name of the country to Éire in 1937, a symbol of its identity as separate from Britain.

In accordance with the terms of a 1938 treaty between the two states, British naval forces close their bases in southern Ireland and the Irish make a settlement of loans provided previously by the British. The two countries continue to drift apart. This separation is underlined further by Eire’s decision to remain neutral during World War II.

In February 1948, John Costello, the head of a six party coalition, ousts Fianna Fail and de Valera from power. By November of that year The Republic of Ireland Act is passed in the Dail, formally ending all Irish allegiance to Britain and its Commonwealth. The Oireachtas gathers to sign The Republic of Ireland Act on December 21, 1948, and it comes into force four months later on Easter Monday, April 18, 1949. The Act ends Ireland’s membership in the British Commonwealth of Nations and the existing basis upon which Ireland and its citizens are treated in the United Kingdom and other Commonwealth countries as “British subjects” rather than foreigners.

The Act, which has five concise sections, grants executive authority of Ireland, and its external relations, to the President of Ireland. The President will act under the advice of Government of Ireland, which will act alone without British influence. The Act is still largely in force but has been amended.

Britain accepts the Republic’s independence, but they enact the Ireland Act of 1949 which holds that citizens of the Republic will not be treated as aliens under British nationality law. They also guarantee to support Northern Ireland until the Northern Irish parliament decides they want a split.