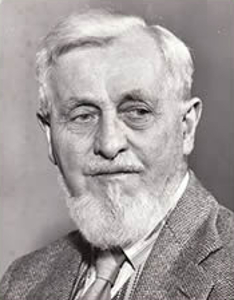 Maurice Walsh, Irish novelist best known for the short story The Quiet Man which is later made into an Oscar-winning movie, is born on April 21, 1879 in Ballydonoghue near Listowel, County Kerry.

Walsh is the third child of ten and the first son born to John Walsh, a local farmer, and his wife Elizabeth Buckley who live in a three-room thatched farmhouse. John Walsh’s main interests are books and horses and he himself does little work about the farm, preferring to have a hired man. The most famous of these hired men is Paddy Bawn Enright, whose name is immortalised by Walsh in his story The Quiet Man, although the name is not used in the later motion picture. John Walsh passes on to his son not only a love of books but also legends and folk tales that are later featured of many of Walsh’s books.

Walsh goes to school in Lisselton, a mile or so up the road from Ballydonoghue, and later goes to St. Michael’s College in Listowel to prepare for the Civil Service examination. He enters the service on July 2, 1901 as an Assistant Revenue Officer in the Customs and Excise Service. He is posted to Scotland before the year is out and, although he subsequently has a number of postings outside Scotland, he spends most of his time there while in the British service.

Walsh has a life-long interest in writing and, during his early years in Scotland, this interest starts to bear fruit. He submits some of his stories and has two published in the Irish Emerald in 1908. Later that year, on August 8, 1908, Walsh marries Caroline Begg in Dufftown, Banffshire, Scotland.

When the Irish Free State is formed in 1922, Walsh transfers to its excise service and moves to Dublin. Fighting is still going on there at the time and he leaves his family in Scotland until it is safe for them to join him in 1923. The story The Key Above the Door is written during the months of separation although it is not published until some years later, appearing first in Chambers Journal as a serial between December 1925 and May 1926 and then in book form, published by W & R Chambers Ltd., in July 1926.

Sales of Walsh’s books grow steadily, especially in the wake of an unsolicited and generous letter from J. M. Barrie, the creator of Peter Pan, praising The Key Above the Door, which Chambers is subsequently able to use on dust covers of Walsh’s books.

Walsh retires from government service in 1933 but his success as a writer continues. In that same year he sells a story to The Saturday Evening Post, then a well-known weekly magazine published in the United States. That story, later to be incorporated in the collection of stories published under the title Green Rushes, is The Quiet Man.

Director John Ford reads the story in 1933 and soon purchases the rights to it for $10. Walsh is paid another $2,500 when Republic Pictures buys the idea and receives a final payment of $3,750 when the film is actually made. Filming commences on June 7, 1951 with John Wayne and Maureen O’Hara in the leading roles. All of the outdoor scenes are shot on location in County Mayo and County Galway. The inside scenes are filmed in late July at the Republic Studios in Hollywood. The Quiet Man wins the Academy Award for Best Director for John Ford, his fourth, and for Best Cinematography.

Walsh becomes President of the Irish branch of PEN International in 1938 and visits the United States for an international meeting that year as the Irish delegate. His wife Caroline is able to accompany him although she has been in failing health for some years and ultimately dies in January 1941. Walsh himself dies on February 18, 1964 in Blackrock, a suburb of Dublin, and is buried in the Esker cemetery at Lucan, County Dublin. President Éamon de Valera attended Walsh’s funeral Mass.

In 2013, The Quiet Man is selected for preservation in the United States National Film Registry by the Library of Congress as being “culturally, historically, or aesthetically significant.”