The son of a shipyard worker, McWhirter is raised in a large extended family on the Shankill Road in Belfast. He and his extended family spend the war years and then weekends and the summers at their seaside bungalow in Carnalea, now a suburb of Bangor, County Down. In 1957 he begins a “combined scholarship” studying English and Spanish at Queen’s University Belfast, and education at Stranmillis University College, Belfast. His tutor at Queen’s is the poet Laurence Lerner, and he is a classmate with the future literary critic Robert Dunbar and the poets Seamus Heaney and Seamus Deane.

After graduating, McWhirter teaches in Kilkeel and Bangor, County Down, and in Barcelona, Spain, before moving to Port Alberni, British Columbia, Canada. After receiving his M.A. from the University of British Columbia (UBC), where he studies under Michael Bullock and J. Michael Yates, he stays on to become a full professor in 1982 and head of the Creative Writing Department from 1983 to 1993. He retires as a Professor Emeritus in 2005.

McWhirter is associated with PRISM International magazine from 1968 to 2005. He is the author and editor of numerous books and the recipient of many awards. His first book of poetry, Catalan Poems, is a joint winner of the first Commonwealth Poetry Prize with Chinua Achebe‘s Beware, Soul Brother. He is made a life member of the League of Canadian Poets in 2005 and is also a member of the Writers’ Union of Canada and PEN International. In March 2007, he is named Vancouver’s inaugural Poet Laureate for a two-year term.

McWhirter currently writes full-time and lives in Vancouver with his wife. They have two children and three grandchildren.

Miriam Gallagher, Irish playwright and author whose works have been performed globally and translated into numerous languages, is born in Waterford, County Waterford, on February 11, 1940.

Born Miriam O’Connor to Michael O’Connor, a bank manager with five children including Valerie, Michael and Fidelma, she goes to school in the Convent of the Sacred Heart in Roscrea, County Tipperary, and in Bregenz, Austria. She goes to college at both the University of London and University College Dublin (UCD). After college she works initially as a speech and language therapist, an occupation which leads to the publication of one of her non-fiction books. She also studies drama in London, at the London Academy of Music and Dramatic Art (LAMDA) under Frieda Hodgson.

Gallagher is commissioned to write essays for The Irish Times, the Irish Medical Times and various journals. She takes up writing screenplays and stage plays. The result is a prolific list of productions which have been staged around the world as well as broadcast by RTÉ and the BBC.

Gallagher varies work from plays to speech therapy, as well as working with prisoners, and this leads her to be a visiting lecturer at universities across the globe. She is deeply involved in the organisations of her craft, leading her to being a member of Irish PEN, both on its committee and as vice president, on the Irish Writers’ Union committee as well as a council member of the Society of Irish Playwrights. Over the years she wins a number of awards including the Arts Council and European Script Fund Awards, the MHA TV Script Award, and the EU Theatre Award.

Gallagher’s husband is Gerhardt Gallagher. They live in Dublin and have three children, Mia, Donnacha, and Etain. In 2012 she is diagnosed with cancer and kidney disease. She dies on January 15, 2018. 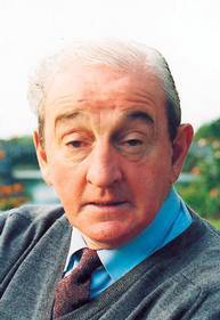 Keane is the son of a national school teacher, William B. Keane, and his wife Hannah Purtill. He is educated at Listowel National School and then at St. Michael’s College, Listowel. He works as a chemist’s assistant for A.H. Jones who dabbles in buying antiques. He has various jobs in the United Kingdom between 1951 and 1955 working as a street cleaner and a bartender and lives in a variety of places including Northampton and London. It is while he is in Northampton that he is first published in an unnamed women’s magazine for which he receives £15.

After returning from the UK, Keane is a pub owner in Listowel from 1955 where he writes plays for the local theatre company and sponsors, from 1971, the annual Listowel Writers’ Week. He marries Mary O’Connor at Knocknagoshel Church on January 5, 1955 and they have four children: Billy, Conor, John and Joanna.

His first play, Sive (1959), is initially rejected by the Abbey Theatre in Dublin but goes on to win the amateur All-Ireland Drama Festival. Later plays include The Field (1965), which is released in a bowdlerized film version in 1990, and Big Maggie (1969), which is produced on Broadway in 1982. In 1998 Keane is honoured with a medal from the Abbey for his contribution to Irish theatre.

Keane is an Honorary Life Member of the Royal Dublin Society from 1991, serves as president of Irish club of PEN International and is a founder member of the Society of Irish Playwrights as well as a member of Aosdána. He is named the patron of the Listowel Players after the Listowel Drama Group fractures. He remains a prominent member of the Fine Gael party throughout his life, never being shy of political debate.

Keane’s nephew is the investigative journalist Fergal Keane. His son John is a journalist with the Kilkenny People while his son Billy regularly writes a column for the Irish Independent.

Maurice Walsh, Irish novelist best known for the short story The Quiet Man which is later made into an Oscar-winning movie, is born on April 21, 1879 in Ballydonoghue near Listowel, County Kerry.

Walsh is the third child of ten and the first son born to John Walsh, a local farmer, and his wife Elizabeth Buckley who live in a three-room thatched farmhouse. John Walsh’s main interests are books and horses and he himself does little work about the farm, preferring to have a hired man. The most famous of these hired men is Paddy Bawn Enright, whose name is immortalised by Walsh in his story The Quiet Man, although the name is not used in the later motion picture. John Walsh passes on to his son not only a love of books but also legends and folk tales that are later featured of many of Walsh’s books.

Walsh goes to school in Lisselton, a mile or so up the road from Ballydonoghue, and later goes to St. Michael’s College in Listowel to prepare for the Civil Service examination. He enters the service on July 2, 1901 as an Assistant Revenue Officer in the Customs and Excise Service. He is posted to Scotland before the year is out and, although he subsequently has a number of postings outside Scotland, he spends most of his time there while in the British service.

Walsh has a life-long interest in writing and, during his early years in Scotland, this interest starts to bear fruit. He submits some of his stories and has two published in the Irish Emerald in 1908. Later that year, on August 8, 1908, Walsh marries Caroline Begg in Dufftown, Banffshire, Scotland.

When the Irish Free State is formed in 1922, Walsh transfers to its excise service and moves to Dublin. Fighting is still going on there at the time and he leaves his family in Scotland until it is safe for them to join him in 1923. The story The Key Above the Door is written during the months of separation although it is not published until some years later, appearing first in Chambers Journal as a serial between December 1925 and May 1926 and then in book form, published by W & R Chambers Ltd., in July 1926.

Sales of Walsh’s books grow steadily, especially in the wake of an unsolicited and generous letter from J. M. Barrie, the creator of Peter Pan, praising The Key Above the Door, which Chambers is subsequently able to use on dust covers of Walsh’s books.

Walsh retires from government service in 1933 but his success as a writer continues. In that same year he sells a story to The Saturday Evening Post, then a well-known weekly magazine published in the United States. That story, later to be incorporated in the collection of stories published under the title Green Rushes, is The Quiet Man.

Director John Ford reads the story in 1933 and soon purchases the rights to it for $10. Walsh is paid another $2,500 when Republic Pictures buys the idea and receives a final payment of $3,750 when the film is actually made. Filming commences on June 7, 1951 with John Wayne and Maureen O’Hara in the leading roles. All of the outdoor scenes are shot on location in County Mayo and County Galway. The inside scenes are filmed in late July at the Republic Studios in Hollywood. The Quiet Man wins the Academy Award for Best Director for John Ford, his fourth, and for Best Cinematography.

Walsh becomes President of the Irish branch of PEN International in 1938 and visits the United States for an international meeting that year as the Irish delegate. His wife Caroline is able to accompany him although she has been in failing health for some years and ultimately dies in January 1941. Walsh himself dies on February 18, 1964 in Blackrock, a suburb of Dublin, and is buried in the Esker cemetery at Lucan, County Dublin. President Éamon de Valera attended Walsh’s funeral Mass.

In 2013, The Quiet Man is selected for preservation in the United States National Film Registry by the Library of Congress as being “culturally, historically, or aesthetically significant.”