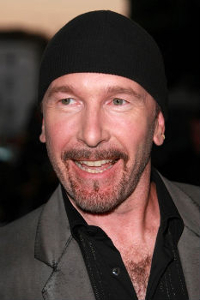 David Howell Evans, British-born Irish musician and songwriter best known by his stage name The Edge and as the lead guitarist, keyboardist, and backing vocalist of the rock band U2, is born at the Maternity Hospital in Barking, Essex, England on August 8, 1961. A member of U2 since its inception, he has recorded 13 studio albums with the band as well as one solo record.

The Edge is raised in Ireland after the Evans family relocates there while he is still an infant. He receives his initial formal education at St. Andrew’s National School in Dublin. As a child he also receives piano and guitar lessons, and practises music with his elder brother Richard. In 1976, at Mount Temple Comprehensive School, he goes to a meeting in response to an advert posted by another pupil, Larry Mullen Jr., on the school’s noticeboard seeking musicians to form a new band with him. Among the other pupils who respond to the note are Paul Hewson (Bono) and Adam Clayton. The band goes through a number of versions before becoming known as U2 in March 1978.

U2 begins its public performance life in small venues in Dublin, occasionally playing at other venues elsewhere in Ireland. In December 1979 they perform their first concerts outside Ireland, in London, and in 1980 begin extensive touring across the British Isles. Their debut album Boy is released in 1980.

In 1981, leading up to the October Tour, Evans comes very close to leaving U2 for religious reasons, but he decides to stay. During this period he becomes involved with a group called Shalom Tigers, in which bandmates Bono and Larry Mullen Jr. are also involved. Shortly after deciding to remain with the band, he writes a piece of music that later becomes Sunday Bloody Sunday.

U2 eventually becomes one of the most popular acts in popular music, with successful albums such as 1987’s The Joshua Tree and 1991’s Achtung Baby. Over the years, the Edge has experimented with various guitar effects and introduced influences from several genres of music into his own style, including American roots music, industrial music, and alternative rock. With U2, the Edge also plays keyboards, co-produced their 1993 record Zooropa, and occasionally contributes lyrics.

In addition to his regular role within U2, The Edge has also recorded with such artists as Johnny Cash, B. B. King, Tina Turner, Ronnie Wood, Jah Wobble, Holger Czukay, Jay-Z, and Rihanna. He has collaborated with U2 bandmate Bono on several projects, including the soundtracks to the musical Spider-Man: Turn Off the Dark and the Royal Shakespeare Company‘s London stage adaptation of A Clockwork Orange.

The Edge, Bob Ezrin, and Henry Juszkiewicz co-found Music Rising in 2005, a charity that helps provide replacement instruments for those that were lost in Hurricane Katrina. The instruments are originally only replaced for professional musicians but they soon realise the community churches and schools need instruments as well. The charity’s slogan is “Rebuilding the Gulf Region note by note” and has helped over a hundred musicians who were affected by the hurricane. The Edge also serves on the board of The Angiogenesis Foundation, a 501(c)(3) nonprofit organisation dedicated to improving global health by advancing angiogenesis-based medicine, diets, and lifestyle.