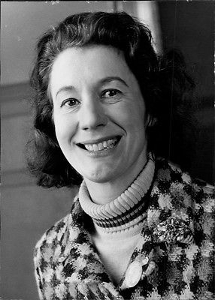 Anne Letitia Dickson is elected leader of the Unionist Party of Northern Ireland (UPNI) on September 15, 1976, becoming the first woman to lead a political party in Ireland.

Born in London on April 18, 1928, Dickson moves with her family to Northern Ireland at an early age and is educated at Holywood and Richmond Lodge School. After service as the Chair of the Northern Ireland Advisory Board of the Salvation Army she becomes actively involved in politics for the Ulster Unionist Party (UUP). Elected as chair of the Carrick Division Unionist Association she later becomes a member of the Newtownabbey Urban District Council, serving as Vice-Chair from 1967 to 1969.

Dickson is then elected as an Ulster Unionist politician for the Carrick constituency in the Parliament of Northern Ireland at Stormont as a supporter of Prime Minister Terence O’Neill. After the dissolution of the Stormont Parliament, she is elected in the 1973 Assembly election for South Antrim as an Independent Unionist candidate having resigned from the Ulster Unionist Party in 1972.

In 1979 Dickson contests the Belfast North constituency in the Westminster election, polling 10% of the vote, the best performance by a UPNI candidate in Northern Ireland, however her intervention is sufficient to split the moderate Unionist vote resulting in the seat being gained by the Democratic Unionist Party (DUP).

The Unionist Party of Northern Ireland disbands in 1981 after poor results in the local government elections and Dickson retires from active politics. Subsequently she is chair of the Northern Ireland Consumer Council from 1985 to 1990.