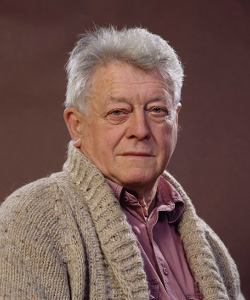 Cathal Goulding, former Chief of Staff of the Irish Republican Army and the Official IRA, dies in Dublin on December 26, 1998.

Goulding is born on January 2, 1923, one of seven children born on East Arran Street, north Dublin to an Irish republican family. As a teenager Goulding joins Fianna Éireann, the youth wing of the Irish Republican Army (IRA). He joins the IRA in 1939. In December of that year, he takes part in a raid on Irish Army ammunition stores in Phoenix Park, Dublin. In November 1941 he is gaoled for a year in Mountjoy Prison for membership in an unlawful organisation and possession of IRA documents. Upon his release in 1942, he is immediately interned at the Curragh Camp, where he remains until 1944.

In 1945, he is involved in the attempts to re-establish the IRA which has been badly affected by the authorities in both the Irish Free State and Northern Ireland. He is among twenty-five to thirty men who meet at O’Neill’s Pub, Pearse Street, to try to re-establish the IRA in Dublin. He organises the first national meeting of IRA activists after the World War II in Dublin in 1946 and is arrested along with John Joe McGirl and ten others and sentenced to twelve months in prison when the gathering is raided by the Garda Síochána.

Upon his release in 1947, Goulding organises IRA training camps in the Wicklow Mountains and takes charge of the IRA’s Dublin Brigade in 1951. In 1953, Goulding, along with Seán Mac Stíofáin and Manus Canning, is involved in an arms raid on the Officers Training Corps armoury at Felsted School, Essex. The three are arrested and sentenced to eight years’ imprisonment, but are released in 1959 after serving only six years at Pentonville, Wakefield, and Stafford prisons. During his time in Wakefield prison, he befriends EOKA members and Klaus Fuchs, a German-born spy who has passed information about the U.S. nuclear programme to the Soviet Union, and becomes interested in the Russian Revolution.

In 1959, Goulding is appointed IRA Quartermaster General and in 1962 he succeeds Ruairí Ó Brádaigh as IRA Chief of Staff. In February 1966, together with Sean Garland, he is arrested for possession of a revolver and ammunition. In total, Goulding spends sixteen years of his life in British and Irish jails.

Goulding is instrumental in moving the IRA to the left in the 1960s. He argues against the policy of abstentionism and develops a Marxist analysis of Irish politics. He believes the British state deliberately divides the Irish working class on sectarian grounds to exploit them and keep them from uniting and overthrowing their bourgeois oppressors. This analysis is rejected by those who later go on to form the Provisional IRA after the 1969 IRA split.

Goulding remains chief of staff of what becomes known as the Official IRA until 1972. Although the Official IRA, like the Provisional IRA, carries out an armed campaign, Goulding argues that such action ultimately divides the Irish working class. After public revulsion regarding the shooting death of William Best, a Catholic from Derry who is also a British soldier, and the bombing of the Aldershot barracks, the Official IRA announces a ceasefire in 1972.

Goulding is prominent in the various stages of Official Sinn Féin‘s development into the Workers’ Party. He is also involved in the anti-amendment campaign in opposition to the introduction of a constitutional ban on abortion along with his partner, Dr. Moira Woods. However, in 1992, he objects to the political reforms proposed by party leader Proinsias De Rossa and remains in the Workers’ Party after the formation of Democratic Left. He regards the Democratic Left as having compromised socialism in the pursuit of political office.

In his later years, Goulding spends much of his time at his cottage in Raheenleigh near Myshall, County Carlow. He dies of cancer in his native Dublin and is survived by three sons and a daughter. He is cremated and his ashes scattered, at his directive, at the site known as “the Nine Stones” on the slopes of Mount Leinster.