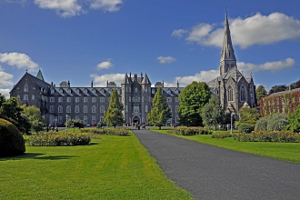 The ordination of the first priests at St. Patrick’s College, Maynooth takes place on June 6, 1800. The college is the “National Seminary for Ireland” and a Pontifical university located in the village of Maynooth, 15 miles from Dublin.

The college is established on June 5, 1795 as The Royal College of St. Patrick, by act of the Parliament of Ireland, to provide “for the better education of persons professing the popish or Roman Catholic religion.” The College in Maynooth is originally established to provide a university education for Catholic lay and ecclesiastical students and is based in Riverstown House on the south campus from 1802. With the opening of Clongowes Wood College in 1814, the lay college is closed and the college functions solely as a Catholic seminary for almost 150 years.

The college is particularly intended to provide for the education of Catholic priests in Ireland, who until this Act have to go to the continent for training. The added value in this is the reduction of the number of priests returning from training in revolutionary France, with whom Great Britain is at war, thus hindering potential revolution. The value to the government is proved by the condemnation by the Catholic Church hierarchy of the Irish Rebellion of 1798 and later support for the Act of Union.

In 1800, John Butler, 12th Baron Dunboyne, dies and leaves a substantial fortune to the College. Butler had been a Roman Catholic, and Bishop of Cork, who had embraced Protestantism in order to marry and guarantee the succession to his hereditary title. However, there are no children to his marriage and it is alleged that he had been reconciled to the Catholic Church at his death. Were this the case, a Penal law demands that the will is invalid and his wealth will pass to his family. Much litigation follows before a negotiated settlement in 1808 that leads to the establishment of a Dunboyne scholarship fund.

The land is donated by William FitzGerald, 2nd Duke of Leinster, who has argued in favour of Catholic emancipation in the Irish House of Lords. He lives nearby at Carton House and also at Leinster House. The building work is paid for by the British Government and parliament continues to give it an annual grant until the Irish Church Act 1869. When this law is passed the College receives a capital sum of £369,000. The trustees invest 75% of this in mortgages to Irish landowners at a yield of 4.25% or 4.75% per annum. This is considered a secure investment at the time but agitation for land reform and the depression of the 1870s erodes this security. The largest single mortgage is granted to the Earl of Granard. Accumulated losses on these transactions reached £35,000 by 1906.

The first building to go up on the site is designed by, and named after, John Stoyte. Stoyte House, which can still be seen from the entrance to the old campus, is a well-known building to Maynooth students and stands very close to the very historic Maynooth Castle. Over the next 15 years, the site at Maynooth undergoes rapid construction so as to cater to the influx of new students, and the buildings which now border St. Joseph’s Square are completed by 1824.

The Rev. Laurence F. Renehan (1797–1857), a noted antiquarian, church historian, and cleric, serves as president of St. Patrick’s from 1845 until 1857. Under Renehan, many of the college’s most important buildings are constructed by Augustus Pugin.

In 2015–16 there are approximately 80 men studying for the priesthood at Maynooth, 60 resident seminarians and approximately 20 non-residents.