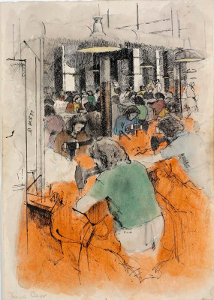 Thomas James Carr, British artist who is associated with the Euston Road School in the 1930s and has a long career as a painter of domestic scenes and landscapes, is born in Belfast to a well-to-do family on September 21, 1909.

Carr attends Oundle School where his art masters include E.M.O’R. Dickey and Christopher Perkins. In 1927 Carr moves to London where he studies at the Slade School of Fine Art. After two years at the Slade, he moves to Italy and spends six months in Florence. Upon returning to London, he establishes himself as a well-regarded painter of domestic scenes.

Although essentially a realist painter, Carr is included in the 1934 Objective Abstractionists exhibition at Zwemmer’s Gallery. In 1937, he shares an exhibition with Victor Pasmore and Claude Rogers at the Storran Gallery and subsequently becomes associated with the representational style of the Euston Road School. Starting in 1940, at Georges Wildenstein‘s gallery, he holds a series of one-man exhibitions at various galleries including at the Leicester Galleries, The Redfern Gallery and also at Thomas Agnew & Sons.

In 1939, Carr returns to Northern Ireland and settles in Newcastle, County Down. During the World War II, he receives a small number of commissions from the War Artists’ Advisory Committee to depict parachute manufacture and the Short Sunderland flying-boats being built at the Short Brothers factory in Belfast.

After the war, Carr teaches at the Belfast College of Art and moves to Belfast in 1955. After the death of his wife in 1995, he moves to Norfolk, England to be nearer one of his three daughters and her family. He continues to paint into old age, and tends to concentrate on landscape painting.

Carr is a regular exhibitor at the Royal Academy of Arts and is a member of the Royal Ulster Academy, the New English Art Club, the Royal Watercolour Society and is an honorary member of the Royal Hibernian Academy. Queen’s University awards him an honorary doctorate in 1991. For his services to art in Northern Ireland, he is awarded the MBE in 1974 and receives an OBE in 1993.