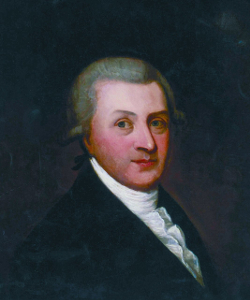 Arthur Guinness is believed to be born in Celbridge, County Kildare on September 25, 1725 into the Protestant Guinness family, part of the Anglo-Irish aristrocracy. They claim to descend from the Gaelic Magennis clan of County Down. However, recent DNA evidence suggests descent from the McCartans, another County Down clan, whose spiritual home lay in the townland of “Guiness” near Ballynahinch, County Down.

Guinness’s place and date of birth are the subject of speculation. His gravestone in Oughter Ard, County Kildare, reads that he dies on January 23, 1803, at the age of 78, and that he is born some time in 1724 or very early in 1725. This contradicts the date of September 28, 1725 chosen by the Guinness company in 1991, apparently to end speculation about his birthdate. The place of birth is perhaps his mother’s home at Read homestead at Ardclough, County Kildare.

In 2009 it is claimed that Guinness is born in nearby Celbridge where his parents live in 1725 and where his father later becomes land steward for the Archbishop of Cashel, Dr. Arthur Price. In his will, Dr. Price leaves £100 each to “his servant” Arthur and his father in 1752.

Guinness leases a brewery in Leixlip in 1755, brewing ale. Guinness also purchases a long lease of an adjacent site from George Bryan of Philadelphia in 1756 that is developed as investment property. He leaves his younger brother in charge of the Leixlip enterprise in 1759 and moves on to another at St. James’ Gate, Dublin. He signs a 9,000-year lease for the brewery, effective from December 31, 1759. The lease is presently displayed in the floor at St. James’ Gate. By 1767 he is the master of the Dublin Corporation of Brewers. His first actual sales of porter are listed on tax data from 1778. From the 1780s his second son, Arthur, works at his side and becomes the senior partner in the brewery in 1803.

Guinness’ major achievement is the expansion of his brewery in 1797–1799. Thereafter he brews only porter and employs members of the Purser family who have brewed porter in London from the 1770s. The Pursers become partners in the brewery for most of the 19th century. By the time of his death in 1803, the annual brewery output is over 20,000 barrels. Subsequently Arthur and/or his beer is nicknamed “Uncle Arthur” in Dublin. Guinness’ florid signature is still copied on every label of bottled Guinness.

From 1764, Guinness and his wife Olivia, whom he marries in 1761, live at Beaumont House, which Guinness has built on a 51-acre farm which is now a part of Beaumont Convalescent Home, behind the main part of Beaumont Hospital, between Santry and Raheny in north County Dublin. His landlord is Charles Gardiner. Beaumont, meaning beautiful hill, is named by Arthur and the later Beaumont parish copies the name. From March 1798 he lives at Mountjoy Square in Dublin, which is then in the process of being built in the style of elegant Georgian architecture. Three of his sons are also brewers, and his other descendants eventually include missionaries, politicians, and authors.

Sir Arthur Guinness dies in Mountjoy Square, Dublin, on January 23, 1803 and is buried in his mother’s family plot at Oughter Ard, County Kildare.

To further honour Arthur Guinness’s legacy, in 2009 Guinness & Co. established the Arthur Guinness Fund (AGF). An internal fund set up by the Company, its aim is to enable and empower individuals with skills and opportunities to deliver a measured benefit to their communities. Guinness has donated more than €7 million to the Fund since its inception. Arthur Guinness is also one of a handful of Irish people commemorated twice on stamps, in 1959 and 2009.

One thought on “Death of Arthur Guinness”