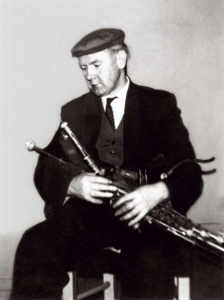 Clancy is born into a musical family in the outskirts of Milltown Malbay, County Clare on December 24, 1918. His parents, Gilbert Clancy and Ellen Killeen, both sing and play concertina, and his father also plays the flute. Clancy’s father has been heavily influenced by local blind piper Garret Barry and passes much of Barry’s music on to Willie.

Clancy starts playing the tin whistle at age five, and later takes up the flute. He first sees a set of pipes in 1936 when he sees Johnny Doran playing locally. He obtains his first set of pipes two years later. His influences include Leo Rowsome, Séamus Ennis, John Potts and Andy Conroy. Clancy wins the Oireachtas competition in 1947. Unable to earn a living from music he emigrates to London where he works as a carpenter.

Returning to Milltown Malbay in 1957 he records some influential 78 rpm recordings for the Gael Linn label, among them the classic reel selection “The Old Bush/The Ravelled Hank of Yarn.” The next decades he stayed in Milltown Malbay. He marries Dóirín Healy in 1962.

Willie Clancy dies suddenly at the early age of 55 on January 24, 1973, leaving a great void. Cór Cúl Aodha sings at his funeral mass, just as Clancy had played at Seán Ó Riada’s funeral only a year earlier. Others who take part include Seán Ach Donnchadha, John Kelly and Séamus Ennis. His funeral cortege to Ballard Cemetery is led by pipers from the Tulla Pipe Band.

The Willie Clancy Summer School is established in his honour in 1973, by Clancy’s friends Junior Crehan, Martin Talty, Seán Reid, Paddy Malone, Paddy McMahon, Frankie McMahon, Jimmy Ward, JC Talty, Harry Hughes, Michael O Friel, Séamus Mac Mathúna and Muiris Ó Rócháin. He is also the subject of a major television documentary “Cérbh É? Willie Clancy” on TG4, first broadcast in November 2009. In this programme, one of a series in which major figures in contemporary traditional music, profile and pay homage to a master of their craft from a bygone age, Peter Browne traces the life and legacy of Clancy.