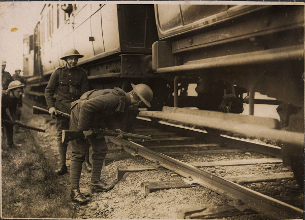 The Headford Ambush is carried out by the Irish Republican Army (IRA) on March 21, 1921, during the Irish War of Independence. The battle lasts almost an hour and fourteen people are killed – nine British soldiers, two IRA volunteers and three civilians.

The guerrilla war in County Kerry escalates rapidly in the spring of 1921. The county is occupied by the British Army, Auxiliary Division and Black and Tans paramilitary police, as well as the Royal Irish Constabulary (RIC). For the previous several months they have been burning suspected Republicans’ property and shooting suspected IRA sympathisers. By early 1921, they have begun rounding up male inhabitants of nearby towns and villages and searching for IRA suspects.

On January 23, in response to the IRA’s assassination of RIC District Inspector Sullivan, 1,000 soldiers and armed police surround Ballymacelligott, arrest 240 men and march them to Tralee for questioning. British forces, especially the Auxiliaries, also carry out a number of reprisal shootings of local civilians. The IRA sets up full-time guerrilla units, known as flying columns, to avoid arrest and to assemble units capable of taking on British patrols. IRA GHQ in Dublin also sends an organizer, Andy Cooney, to Kerry to oversee the setting up of flying columns. On March 2, under Cooney’s direction, the 2nd Kerry Brigade sets up its own flying column under Dan Allman and Tom McEllistrim. On March 5, McEllistrim leads 20 volunteers from the column to a successful ambush at Clonbanin, in which they co-operate with Cork IRA units, killing four British soldiers including Brigadier General Hanway Robert Cumming. Buoyed by their success in Cork, the 2nd Kerry Brigade tries on a number of occasions to ambush British forces in Kerry itself.

On March 21, an IRA party of the 2nd Kerry Brigade is billeted about four miles from the Headford railway junction when they hear that British troops are returning by train from Kenmare to Tralee. As the train does not go directly to Tralee, the British have to change trains at Headford, making them vulnerable to ambush. Allman, commanding 30 volunteers, reaches the junction only 12 minutes before the train, which is carrying 30 soldiers of the 1st Royal Fusiliers. The railway staff just has time to flee before the train pulls into the platform, where its passengers have to change trains for Tralee. Alongside the soldiers, the train is packed with cattle and pig farmers on their way back from the market in Kenmare. Most of the civilians have already got off when the British soldiers begin to disembark. Allman himself tries to disarm a Fusilier but shoots him when he resists. This is the signal for the IRA to open fire on the British troops.

One of the first British casualties is Lieutenant CE Adams DCM, who is shot dead when he appears at the carriage door, as are several other soldiers who are standing in front of the engine. The surviving British troops open fire from the train while those who have got off scramble underneath it for cover. In the ensuing close-quarter firefight, conducted at a range of just 20 yards, three civilians and two IRA volunteers, including Allman, are killed. Two-thirds of the British force is estimated to have been killed or wounded. Most of those killed are hit in the initial firing. Afterwards, the IRA gunmen have no direct field of fire into the troops who are hidden under the train.

MacEllistrim calls on the survivors to surrender and when they refuse, the IRA begins to move in to finish off those who keep shooting by throwing hand grenades under the train. Just as they are doing so, another train pulls into the junction carrying another party of British troops. The IRA column has used most of its ammunition and is forced to retreat, escaping toward the hills in the south.