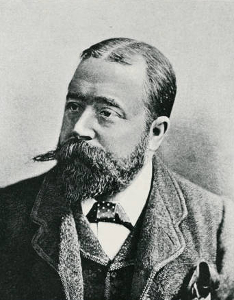 Harry Furniss, artist and illustrator, is born in Wexford, County Wexford on March 26, 1854. His father is English and his mother Scottish, Furniss identifying himself as English. He is educated at Wesley College in Dublin.

Furniss’s first job as an illustrator is for the Illustrated Sporting and Dramatic News, and when it is purchased by the owner of The Illustrated London News he moves to that magazine. There he produces illustrations of social events such as the The Boat Race, Goodwood Racecourse and even the annual fancy dress ball at Brookwood Asylum, as well as acting as a special correspondent reporting on less pleasant aspects of life in contemporary England, such as the scandalous divorce trial of Lady Colin Campbell.

After some years Furniss moves to The Graphic, initially writing and illustrating a series of supplements titled “Life in Parliament,” and he comments that “from this time forward it would be difficult to name any illustrated paper with which I have not at sometime or other been connected.”

Furniss’s most famous humorous drawings are published in Punch, for which he starts working in 1880, and to which he contributes over 2,600 drawings. He leaves Punch in 1894 when its owners discover that he has sold one of his Punch drawings to Pears Soap for use in an advertising campaign.

Upon leaving Punch, Furniss brings out his own humorous magazine, Lika Joko, but when this fails he moves to the United States where he works as a writer and actor in the fledgling film industry and where, in 1914, he pioneers the first animated cartoon film for Thomas Edison.