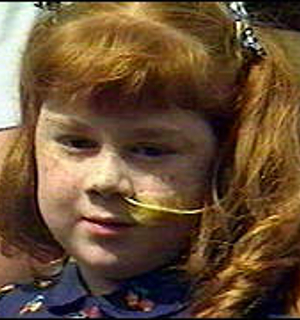 Chapman has to wait two years for a donor to come forward. The hospital releases pictures of Adele in March 1998 in a bid to get donors to come forward. Her donor is of a similar age to her and also donates her heart and kidneys for transplants.

The youngest of five children, Chapman says the first thing she plans to do when she gets home is to “give my daddy and brothers and sisters a hug and a kiss.” Her mother Doreen says the family has been on a “roller coaster of emotion” over the past two years. At times, they had thought Adele would not survive. “Three months ago she was lying absolutely devastated on the bed and could not move. The transformation is just wonderful,” she said. “Now we are looking to the future.”

Chapman’s complex 10-hour operation is carried out by a team led by Jean de Ville de Goyet from Birmingham Children’s Hospital and David Mayer from the Queen Elizabeth Hospital in Birmingham. The Children’s Hospital is the only centre in the United Kingdom which can perform small intestine and liver transplants on children.

Chapman had a rare bowel disease which prevented her from eating solid food for two years. But only four weeks after her operation she is tucking into toast and doughnuts. Shortly after the surgery, the hospital says there has been no major medical or surgical problems as a result of the operation, although she still has a single feeding tube attached to her nose.

Chapman’s family calls for more donors to come forward. Donor organisations are trying to get more people signed up to the national organ donor register. The number of transplants has fallen by 10% in the years prior to 1998. Beverley Cornforth, a transplant educationalist, says the real problem is the 30% who say no to donating organs. This is often because people who die have not stated in advance that they would like to donate their organs and families are too distressed to decide for them.