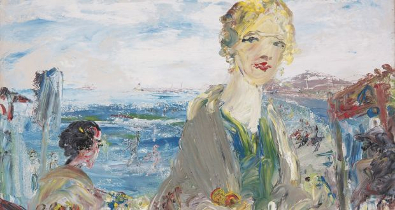 Cash-strapped Aer Lingus auctions its collection of paintings on November 20, 2001. Most money goes on By Merrion Strand by Jack Butler Yeats, an oil-on-canvas, which sells for £290,000.

Aer Lingus, already in difficulties, is left in an even more perilous position by the effects of the September 11 terrorist attacks in the United States. The airline decides to realise some of its assets by selling 25 paintings from the company art collection. Members of the public are given an opportunity to buy part of Aer Lingus well ahead of any possible share flotation. The paintings are handed over to Dublin auctioneer John de Vere White and are offered at the Royal Hibernian Academy Gallagher Gallery on November 20 with the expectation of bringing around £500,000 (€635,000).

Visitors to Dublin Airport or Aer Lingus’s various offices notice very little change as in recent years only two of the paintings are on display, both of them in the chairman’s office. The remainder have been in storage which is one reason why the group are now being sold as part of Aer Lingus’s efforts to raise additional revenue.

One of the pictures removed from the chairman’s office is also both the longest-owned by the organisation and is ultimately the highest earner at auction. Jack Butler Yeats’s By Merrion Strand, which dates from 1929 and shows a woman standing before an expanse of the south Dublin coastline, is acquired by Aer Lingus in 1940, just four years after the company’s founding. According to company lore, it was spotted in London by a member of staff who left a £5 deposit on the painting.

Two paintings by Nathaniel Hone also have reasonably strong pre-sale estimates, Children on the Rocks valued at £25,000-£35,000 and Cattle in a Field at Malahide believed to be worth £10,000-£15,000. Other artists represented in the Aer Lingus collection being sold include Louis Le Brocquy, Patrick Collins, Norah McGuinness, Gerard Dillon and George Campbell.

Five other works in the collection, all acquired by the airline between the 1940s and the 1960s, are bought by the Irish state ahead of the auction.

(Pictured: By Merrion Strand, an oil-on-canvas painting by Jack B. Yeats, dating from the late 1920s)