George Campbell, Irish artist and writer, is born on July 29, 1917, in Arklow, County Wicklow. Although he grows up in Belfast, Northern Ireland, he spends much of his adult life living and painting in Spain and Dublin.

Campbell is the son of Matthew Arthur Campbell (1866-1925), caterer, and Gretta Campbell (née Bowen) (1880-1981). He attends boarding school at Masonic Orphan Boys’ School at Clonskeagh, Dublin, before moving to Belfast to live with his widowed mother and family.

Campbell is working in an aircraft factory at the time of the Belfast Blitz, and begins to paint, taking the bomb-damage as his subject. He is one of the founders of the Irish Exhibition of Living Art in 1943. In the same year, along with his brother Arthur (1909-94), he publishes a sixteen page book entitled Ulster in Black and White, that includes drawings from the two brothers and their close contemporaries Maurice Wilks and Patricia Webb. Owing to the success of the original publication, the brothers then publish Now in Ulster (1944), an anthology of short stories, essays and poetry by young Belfast writers.

Campbell holds a joint exhibition at the William Mol Gallery, Belfast, with his brother Arthur in 1944. In the same year he also shows with Gerard Dillon at the Portadown gallery of John Lamb. In 1946 he shows with the Victor Waddington Gallery in Dublin, where he is to return on a number of occasions. The Council for the Encouragement of Art and Music hosts a solo exhibition in 1949 where he is to show twice more, in 1952 and 1960. He wins £500 at the first Council for the Encouragement of Music and the Arts (CEMA) Open Painting Competition at the Ulster Museum in 1962. Campbell also shows in one-man exhibitions with the Arts Council of Northern Ireland in 1966 and 1972.

After the war Campbell becomes increasingly interested in Spain. In 1946 he comes to know Spaniards who had settled in Dublin, and when in London paints visiting Spanish dancers in their traditional costume. He first visits Spain in 1951, encouraged by his friendship with Gerard Dillon and “an interest in bohemian characters.” He lives there for six months almost every year throughout much of the following twenty-five years.

Campbell makes stained glass windows for the Cathedral of Our Lady Assumed into Heaven and St Nicholas in Galway. He also plays flamenco guitar. A member of the Royal Hibernian Academy, he wins the Douglas Hyde Gold Medal in 1966 and the Oireachtas Prize for Landscape in 1969. The Spanish government makes him a Knight Commander of Spain in 1978.

Campbell dies in Dublin on May 18, 1979, and is buried at St. Kevin’s Cemetery in Glendalough, County Wicklow. He is survived by his wife Margaret, his mother, and two brothers, Arthur and Stanley. After his death the Arts Council of Northern Ireland and An Chomhairle Ealáion join with the Instituto Cervantes to initiate the George Campbell Memorial Travel Award. In May 2017, Arklow Municipal District Council unveils two plaques at St. Patrick’s Terrace, Arklow, marking Campbell’s birthplace and the centennial of his birth.

Arthur Armstrong, landscape and still life painter who often works in a Cubist style, is born in Carrickfergus, County Antrim, Northern Ireland, on January 12, 1924. A prolific painter, completing up to 300 paintings a year, in oils, watercolour and mixed media, he regards himself first and foremost as an abstract artist.

Armstrong is the son of a house painter and attends Strandtown Primary School. Later he studies architecture at Queen’s University Belfast, but after two years he moves to study art at Belfast School of Art. The influence of Cubism and the School of Paris can be clearly seen in his work, which takes him to England, France and Spain. He also travels and paints in the west of Ireland and Connemara inspires some of his best work. In 1950 his work is exhibited in the Grafton Gallery in Dublin, and subsequent exhibitions take place in England, Spain and the United States, as well as in Belfast and Dublin. In 1957 he is awarded a travelling scholarship from the Council for the Encouragement of Music and the Arts (CEMA), a forerunner of the Arts Council of Great Britain, and goes to Spain. He eventually settles in Dublin in 1962 and begins showing work at the Royal Hibernian Academy.

In 1968 Armstrong is awarded the Douglas Hyde Gold Medal at the Oireachtas Exhibition. In 1969 he designs sets, with George Campbell and Gerard Dillon, for the Seán O’Casey play, Juno and the Paycock, at the Abbey Theatre in Dublin. He becomes a member of the Royal Hibernian Academy in 1972 and in 1973 he is awarded the Art in Context prize from the Arts Council of Northern Ireland. He becomes a member of Aosdána in 1981, the same year that a retrospective exhibition of his work from 1950 to 1980 is held by the Arts Council of Northern Ireland.

From 1971 Armstrong lives at 28 Chelmsford Avenue, Ranelagh, Dublin, in a house he shares with Gerard Dillon. A bachelor, Armstrong dies in a Dublin hospital on January 13, 1996. The contents of his studio are sold February 3, 1998.

(Pictured: “Glendalough” by Arthur Armstrong, oil on board) 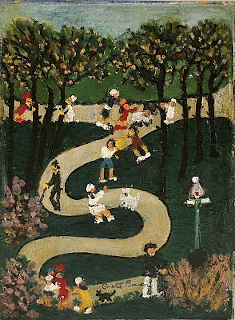 Margretta Bowen, self-taught Irish artist best known as Gretta Bowen, dies in Belfast, Northern Ireland on April 8 1981. She starts painting late in life, around 1950, after her sons Arthur and George Campbell are already established as artists.

Born in Dublin in January 1880, Bowen lives most of her life in Belfast. She is married to Matthew Campbell, a veteran of the Second Boer War. They have three sons, Arthur, George and Stanley, who all go on to be highly talented artists, with George becoming particularly successful. After her husband death in 1925 she runs a laundrette and takes in lodgers to make ends meet.

Bowen comes to art late in her life. A few weeks before her seventieth birthday she finds paints left behind by her son Arthur and begins to experiment, apparently inspired to some extent by her sons. She uses her maiden name to apparently avoid any obvious connection with them.

Bowen clearly attracts notice early on despite her late start. In 1959, just five years after she takes up painting, she is given a solo exhibition by the Council for Encouragement of Music and the Arts, which continues to support her work when it subsequently becomes the Arts Council of Great Britain. An extensive and admiring review appears in The Times.

Bowen’s work is shown at the Royal Hibernian Academy, the Irish Exhibition of Living Art and the Oireachtas. She also holds one-person exhibitions at the Hendriks Gallery, the Bell Gallery and the Tom Caldwell Gallery. In 1979, at the age of 99, her works gain international fame. She exhibits at the first International Exhibition of Naïve Art in London.

Cash-strapped Aer Lingus auctions its collection of paintings on November 20, 2001. Most money goes on By Merrion Strand by Jack Butler Yeats, an oil-on-canvas, which sells for £290,000.

Aer Lingus, already in difficulties, is left in an even more perilous position by the effects of the September 11 terrorist attacks in the United States. The airline decides to realise some of its assets by selling 25 paintings from the company art collection. Members of the public are given an opportunity to buy part of Aer Lingus well ahead of any possible share flotation. The paintings are handed over to Dublin auctioneer John de Vere White and are offered at the Royal Hibernian Academy Gallagher Gallery on November 20 with the expectation of bringing around £500,000 (€635,000).

Visitors to Dublin Airport or Aer Lingus’s various offices notice very little change as in recent years only two of the paintings are on display, both of them in the chairman’s office. The remainder have been in storage which is one reason why the group are now being sold as part of Aer Lingus’s efforts to raise additional revenue.

One of the pictures removed from the chairman’s office is also both the longest-owned by the organisation and is ultimately the highest earner at auction. Jack Butler Yeats’s By Merrion Strand, which dates from 1929 and shows a woman standing before an expanse of the south Dublin coastline, is acquired by Aer Lingus in 1940, just four years after the company’s founding. According to company lore, it was spotted in London by a member of staff who left a £5 deposit on the painting.

Two paintings by Nathaniel Hone also have reasonably strong pre-sale estimates, Children on the Rocks valued at £25,000-£35,000 and Cattle in a Field at Malahide believed to be worth £10,000-£15,000. Other artists represented in the Aer Lingus collection being sold include Louis Le Brocquy, Patrick Collins, Norah McGuinness, Gerard Dillon and George Campbell.

Five other works in the collection, all acquired by the airline between the 1940s and the 1960s, are bought by the Irish state ahead of the auction.

(Pictured: By Merrion Strand, an oil-on-canvas painting by Jack B. Yeats, dating from the late 1920s)