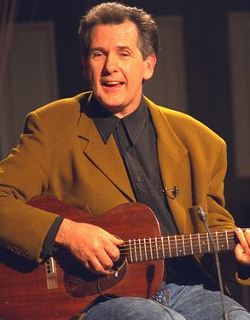 Christie Hennessy, Irish folk singer-songwriter, dies in London on December 11, 2007. Although Hennessy is unable to read or write due to severe dyslexia, he still writes his own songs such as “Roll back the Clouds” and “All the lies that you told me.”

Hennessy is born in Tralee, County Kerry on November 19, 1945. His first guitar is made, especially for him, from a tea chest when he is six years old by his friend Jerry Quirke. He leaves school at the age of eleven.

Hennessy’s first job is as a messenger boy, and it is then that he discovers that it is important to be able to read. He is unable to read or write due to severe dyslexia, but still enjoys his library of books. He later works on building sites in London.

In 1972 Hennessy releases his first record, The Green Album, on Westwood, a small label. With scant publicity or promotion, the album makes little impact and only 500 copies of the record are pressed. He returns to labouring on building sites in the UK and does not release another album for twenty years. When he does, his 1992 release The Rehearsal outsells U2 in Ireland, eventually attaining triple platinum status. His following albums, A Year in the Life and Box also sell extremely well in Ireland.

A renowned songwriter as well as performer, Hennessy writes several songs that become hits for other singers including Don’t Forget your Shovel, made famous by Christy Moore, and All the Lies that You Told Me, recorded by Frances Black. He also composes the theme tune and incidental music for the BBC TV series Get Well Soon written by Ray Galton (of Steptoe & Son fame) and composes and writes a musical/feature film about his native Ireland, Two Stops to Paradise.

In 2005, Christy Moore’s rendition of Hennessy’s Don’t Forget Your Shovel is referenced in a UK Number One single JCB by Nizlopi. It is further referenced in the video for the same song. As the line is sung, the characters in the JCB pass a shop called “Christie’s Shovels.”

Hennessy returns to the studio in 2007, one final time to record an album with both Luka Bloom and Christy Moore sharing vocals on one of the tracks.

Christie Hennessy dies on December 11, 2007 in a London hospice, at the age of 62. He is reported to have died from pleural mesothelioma, a rare form of lung cancer, which has been attributed to his younger years spent working on building sites in London where he was exposed to asbestos dust. Just before he dies he had been touring in Ireland but had to cancel due to the illness. His ashes are buried in Old Rath Cemetery, Tralee. A commemorative statue of Christie is erected in Central Plaza, just off the town square in Tralee in November 2009.